Revelations of the Ruby Crystal (Hardcover) 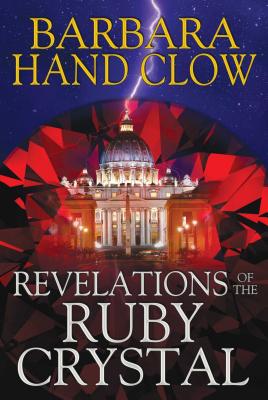 • From the author of The Pleiadian Agenda and The Mayan Code

Set in Rome in 2012, the story follows Sarah Adamson, a beautiful young Catholic graduate student from Boston studying at the Vatican Library for her thesis on the first Christian heretic, Marcion of Pontus. She is being courted by two utterly different men: Simon Appel, a descendent of the kabbalist Isaac Luria who covers Vatican affairs for the New York Times, and Armando Pierleoni, the heir to an ancient Italian aristocratic family with strong ties to the Vatican. After a terrible encounter with the dark side at a castle in Tuscany, Sarah is given a ring set with a ruby crystal, a powerful stone that was once the third eye of an ancient Buddha statue in Nepal.

With the mystic ring on her finger, Sarah’s visionary abilities are ignited. She remembers her past life as the Sibyl of Cumae, a Roman oracle whose powers are now being channeled by the Vatican to maintain world control. As Sarah’s research and visions reveal the cause of evil in the Church and Simon’s reporting exposes the depth of the sexual abuse scandals surrounding the Vatican, the two form an alliance with an ex-lover of both Simon and Armando, Claudia, who describes secret priestly power rituals going on in Vatican City.

As the heightened energies of the winter solstice of 2012 arrive and 2013 dawns, will Simon and Sarah be able to harness their divine powers for transformation? Will the Vatican seek new direction as it elects a new pope? Revealing the very nature of how evil gets into the world, this novel of romance, mystery, heresy, and spirituality uncovers the esoteric foundations for the emergence of a golden new age.

Barbara Hand Clow is an internationally acclaimed ceremonial teacher, author, and Mayan Calendar researcher. Her numerous books include The Pleiadian Agenda, Alchemy of Nine Dimensions, Awakening the Planetary Mind, Astrology and the Rising of Kundalini, and The Mayan Code. She has taught at sacred sites throughout the world and maintains an astrological web site, www.HandClow2012.com

“Barbara Hand Clow has chosen a romance-style genre of fiction to take the reader deep into the hidden history, and profoundly disturbing practices, of the religious power center of the planet--the Vatican. With Hand Clow’s usual impeccable level of research and profound personal insights, Revelations of the Ruby Crystal reminds us that we have entered a time of awakening from a deep trance induced by the Church and other power structures around us. I look forward to a sequel!”
— Regina Meredith, journalist and host of GaiamTV

“This book draws you in from the very first page with believable characters, stimulating interactions, and compelling subject matter. Truly a superb novel for everyone interested in the origins of civilization and the mysteries of the universe, and this is just the beginning! Make way for a powerful new literary saga in your life!”
— Andrew Collins, author of Göbekli Tepe: Genesis of the Gods

“In the midst of this irresistible novel, Barbara Hand Clow weaves very real stories of the scandalous inner workings of the Vatican. Her inclusion of accurate information about the deep-seated sexual abuse issue, the corrupt power plays, and the equally corrupt churchmen who have sustained it only adds to the fascination of the main storyline.”
— Thomas Doyle, Catholic priest and author of Sex, Priests, and Secret Codes: The Catholic Church&rsqu

“Barbara has done it again. She has given readers a great gift with this book. Revelations of the Ruby Crystal reveals her mastery of the written word. This book is a doorway into another place filled with great truths, relevant knowledge, and modern-day mysticism. The synchronistic magic she weaves within her characters’ adventures, and the love story that evolves between them, is an example of the full bloom of human potential.”
— Hillary Raimo, founder of Love . . . Breathe . . . for Earth

“Played out in the story of uncovering the abusive power of male sexuality at the heart of the Vatican, this romance offers an introduction to what is a significant religious movement by providing insight into the character and attraction of the Gnosticism of New Age belief and practices. A page-turning novel of love and desire, abuse and corruption, and the cosmic quest for redemption, this is the best of introductions to the appeal of astrology and New Age spirituality over and against common perceptions of Christian faith and the Church.”
— Timothy F. Sedgwick, Ph.D., Clinton S. Quin Professor of Christian Ethics at Virginia Theological Se

“Barbara Hand Clow’s Revelations of the Ruby Crystal is a unique revelation about deep cosmic processes and actors in the dimensional ecology of our planet as well as a page-turner story about loss, redemption, and transformation of beings who are deeply in love. As a legal advisor, I can vouch for the authenticity of the darker aspects at work in the action set in Rome and in the Vatican itself. It is truly a novel for our times.”
— Alfred Lambremont Webre, author of The Omniverse: Transdimensional Intelligence, Time Travel, The Af

“Barbara Hand Clow’s book Revelations of the Ruby Crystal opened my eyes even further to the world-creating artistry--the ‘fictive power’--of the imagination to shape our world and influence our souls. The story that she weaves is a perfect example of how storytelling is the shamanic art par excellence that helps us to de-literalize our own reading of the world and remember who we are.”
— Paul Levy, author of Dispelling Wetiko: Breaking the Curse of Evil

“As a software trainer and developer and a published author of two books on word processing, I often encounter many technology users who are longing for a vision of what might be possible as a ‘next step’ in our evolution. Revelations of the Ruby Crystal is a divinely inspired web of transcendent energy that has a magnetic appeal. This book is a visually rich, sensual, non-social-mediadriven trans-Atlantic adventure using revelatory information about the historical past that moves us through a complex romance quite unlike any that has ever been written. A must read!”
— Marianne Carroll, business productivity consultant

“Revelations of the Ruby Crystal is a gift for anyone interested in unmasking a time line of deep secrets and hushed discoveries about the life of Jesus; the ossuary of Peter found in Jerusalem; the earliest years of Christianity; Marcion, a so-called heretic; and Christianity’s critical ‘wrong turn’ and its eventual takeover, distortion, and corruption by the Roman patriarchy. The intense dramas are played out against the backdrop of a powerful paradigm shift jolting world events into chaos, the Vatican into a meltdown, and a time of transformation into the ethers, finally welcomed in Rome by the surprising and sudden election of Pope Francis, the ‘revolutionary.’ It is an intense, exciting read.”
— Jean Richard, polarity therapist for ritual abuse