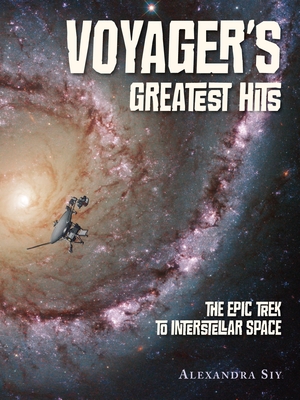 2017 marks the 40th anniversary of the Voyager mission as the twin space probes that traveled to Jupiter, Saturn, Uranus, and Neptune, now journey beyond our solar system into interstellar space, where no probe has ventured before.

Learn the fascinating story of the scientists, how the Voyager probes work, where the probes have been and what they’ve seen, and what they carry on board—including the Golden Record, a recording of sounds and images about life on Earth.

A lively, informative, and inspiring story of space exploration—Kirkus Reviews

A timely introduction to the Voyager mission—Booklist

Alexandra Siy is the author of several science books for children, including Spidermania: Friends on the Web (Holiday House), Cars on Mars: Roving the Red Planet, and Mosquito Bite, recipient of the Orbis Pictus Honor Award. She is also a regular contributor to The Nonfiction Minute.

*Forty years after the launch of the twin space probes, Siy’s well-researched and enthusiastic title depicts their conception, construction, major discoveries, and lasting legacy. After two introductory chapters, the narrative settles into a pattern: each chapter opens with a historical breakthrough, such as Galileo discovering four of Jupiter’s moons, and then relates some pertinent information gained from the Voyagers’ data as well as photos from specific encounters. The material is presented in a chronological order that roughly follows Voyager One’s and Voyager Two’s journeys, taking readers from launch on Earth through reaching interstellar space. The final chapter, on the Golden Records, the Voyagers’ message in a bottle from Earth to aliens who may come across it, ends the book on a hopeful note. The back matter, especially the links found in “Keeping Up with the Voyagers,” will be invaluable for those wanting more. Siy’s conversational tone makes for quick reading, and she deftly injects humor into what could have been challenging passages about eight-tracks and other 1970s era technology. Beautiful full-page photographs, most of which are from the Voyager mission, enhance the text. VERDICT An engaging and captivating STEM title that deserves a place in most libraries.
—School Library Journal, starred review

From the author of Cars on Mars: Roving the Red Planet (2011) comes this fascinating story of the twin Voyager probes, launched 40 years ago to travel to the outer planets of our solar system and now continuing into interstellar space. The story begins with two graduate students in the early 1960s. CalTech aeronautics student Gary Flandro, working part-time at NASA's Jet Propulsion Lab, is encouraged by his boss to investigate gravity-assist rocket trajectories to the outer planets. Flandro builds upon the idea of unlimited, gravity-propelled interplanetary space travel invented four years earlier by UCLA physics and mathematics student Michael Minovitch. It was Minovitch's idea of using a planet's gravitational filed as a "slingshot" effect to enable a spacecraft to travel from one planet to another that made the Voyager mission feasible. In an accessible narrative written in engaging conversational style, including the remarkable Golden Record that readers will wish for more detail about—and what was discovered in their journeys to Jupiter, Saturn, Uranus, and Neptune, and their ventures beyond the solar system. Chapters are divided into subtopics, keeping the narrative manageable, and plentiful full-color photographs and schematics neatly complement the text. A lively, informative, and inspiring story of space exploration.
—Kirkus Reviews

In 1965, a graduate student working part-time at the Jet Propulsion Laboratory envisioned "the Grand Tour." Taking advantage of a rare planetary alignment during the 1980s, NASA could slingshot space probes from one planet to another, saving fuel while gathering data and beaming it back to Earth. With the space telescope and space shuttle projects already in progress, funding looked unlikely, but the Voyager mission got the go-ahead, and the rest is space exploration history. Forty years after the launch dates, Siy tells the story of the Voyager 1 and 2 space probes, from their brilliant conception and the idealistic Golden Record through the revolutionary series of planetary discoveries and Voyager 1's entry into interstellar space. Writing in a conversational style, Siy presents a good deal of information in an accessible way. She creates a sense of discovery as scientists interpret data, and images are sent back by the probes. Most double-page spreads include at least one illustration, usually a NASA image reproduced in color. A timely introduction to the Voyager mission.
—Booklist


It took clever observations and some political wrangling to get the twin spacecraft, Voyager I and II, off the ground in 1977. As some scientists suggested that spacecraft could reduce fuel consumption to near zero by using planets' gravitational fields as acceleration "assists," other scientists noted that a narrow window of opportunity, due to planetary alignment, would open in 1977, giving a space mission a clear path to planet hop right on out of the solar system. Government coffers weren't exactly overflowing for this ambitious project, but a more modest flight was proposed—settle for Jupiter and Saturn, with one craft to do the research and the other as a backup. The concept and execution worked so well that, forty years later, the Grand Tour is still going on, with Voyagers sending data back to Earth from beyond Neptune. Siy is an enthusiastic tour guide, presenting the highlights of planetary fly-bys that changed our understanding of space with every fresh data drop. Each chapter begins with a brief history lesson of what we thought we knew and then moves on to a lively discussion of what we now think we know instead. Siy incorporates mini science lessons as need arises throughout the text, which results in a smooth, sidebar-free reading experience. Plenty of photographs, captioned to denote whether the image is false colored, will attract browsers, while source notes and resource lists will direct report writers to information about their favorite mind-blowing discoveries. Best of all, there's more to come.
—BCCB

Siy (Spidermania: Friends on the Web) weaves a musical theme into the riveting story of NASA's Voyager mission, which got underway in 1977 with the launch of two probes; originally designed to explore Jupiter and Saturn, they are now proceeding into interstellar space while transmitting data back to Earth. Throughout, Siy introduces scientists who contributed to the launch while bouncing between the probe's paths (and attendant discoveries, such as volcanic activity on Io) and the pivotal work of Galileo and other early astronomers, highlighting the way science builds on past discoveries. In keeping with the musical theme, Siy concludes by discussing the Golden Record, a copper LP with copies riding aboard the Voyager probes, which contains photos, greetings, and music in wait of a potential extraterrestrial listener. It's an engaging and readily accessible account of a remarkable—and ongoing—scientific success story.
—Publishers Weekly