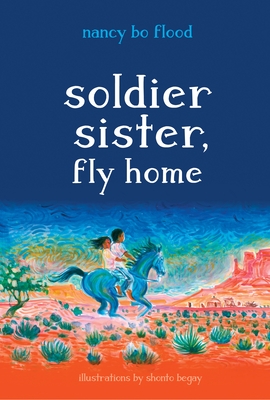 By Nancy Bo Flood, Shonto Begay (Illustrator)
Email or call for price.
Not Available at This Time

A tender and gripping novel about family, identity, and loss.

Thirteen-year-old Tess is having a hard enough time understanding what it means to be part white and part Navajo, but now she's coping with her sister Gaby's announcement that she's going to enlist and fight in the Iraq war. Gaby's decision comes just weeks after the news that Lori Piestewa, a member of their community, is the first Native American woman in US history to die in combat, adding to Tess's stress and emotions. While Gaby is away, Tess reluctantly cares for her sister's semi-wild stallion, Blue, who will teach Tess how to deal with tragic loss and guide her own journey of self-discovery.

Lori Piestewa was a real-life soldier who was killed in Iraq and was a member of the Hopi tribe. Back matter includes further information about Piestewa as well as a note by author Nancy Bo Flood detailing her experiences living on the Navajo reservation. A pronunciation guide to all Navajo vocabulary used within the text is also included.

Nancy Bo Flood was a research psychologist and studied brain development at the University of Minnesota and the University of London before writing books for children. She has a special interest in legends and folklore. Her titles include Warriors in the Crossfire (Boyds Mills) and Cowboy Up! Ride the Navajo Rodeo (WordSong). Nancy lives in Glenwood Springs, Colorado.

♦ In this slender, elegant novel from Flood (No Name Baby), half-Navajo/half-white Tess, 13, feels like she doesn't belong anywhere. Schoolmates at her Flagstaff boarding school call her anmes like Pokeyhontas; on the reservation she looks--and sometimes feels--more white than Navajo. Set against the backdrop of the Iraq War (the book opens with a memorial ceremony for a young Navajo woman killed in combat, and Tess's beloved older sister, Gaby, is deployed soon after), the book successfully presents Tess's shifting emotions as she grapples with the vicissitudes of a close sibling relationship, revels in her daily runs in the desert, and struggles to bond with a temperamental horse. Navajo traditions, ceremonies, and family relationships are described with gentle reverence; even the butchering of an ewe is depicted as a beautiful act. Navajo words and phrases are used throughout in a fashion that always feels natural. Flood lived and taught on the Navajo Nation for 15 years, and this quietly moving story of Tess's growing maturity as she searches for her cultural identity resounds with authenticity. Art not seen by PW.
- Publishers Weekly, starred review

Tess and her older sister, Gaby, siblings who live in Navajo Nation with their family, are close, but when Gaby enlists in the military, their bond is threatened. Gaby entrusts Tess with her beloved stallion, Blue, whom Tess deems unstable and scary. Tess would much rather take in and experience the canyon while running on her own two legs, yet she makes the promise to her sister that she will look after Blue. After Gaby leaves, Tess questions where she fits into the world and how her biracial identity affects her sense of self. At school, she is seen as "the Indian girl." Even at home on the reservation, Tess still feels like an outsider. After spending time with her grandmother, her shima sani, at sheep camp, she begins to realize there are many answers as to what makes a person who they are. When tragedy strikes Blue, the true strength of the sisters' bond is tested. Tying in this book with the death of real-life fallen soldier Lori Piestewa feels a bit forced; the story would have stood alone without this inclusion. Endnotes suggest that Flood consulted with Navajo people; however, there is no mention of Piestewa's family. VERDICT A tender story set in contemporary Navajo Nation, with themes that will resonate with many readers on their own journey toward self-discovery.
- School Library Journal

When Tess' older sister is deployed to Iraq, the 13-year-old is bereft. To make matters worse, she is grappling with her sense of identity as a part white, part Native American teen--an inner conflict exacerbated as she splits her time between a mostly white boarding school in Flagstaff and her Navajo reservation. Racist taunts, both on the reservation and at school, leave her unsure of where she belongs. After school lets out for the summer, Tess joins her grandma for "sheep camp," where she helps care for a flock and experiences several important revelations. Flood provides a detailed portrayal of Shima Sani (Grandma)--an iconic figure who can weave Pendleton rugs as well as she can work the Internet, and herd sheep as easily as she can connect with Emily Dickinson--who plays a pivotal role in helping Tess bridge the two cultures of which the girl is a part. Despite some cultural heavy-handedness, this engaging coming-of-age story will resonate with middle-grade readers beginning to find their place in the wider world.
- Booklist

The daughter of a Navajo woman and a white man struggles with her older sister's deployment to Iraq and her own sense of self. Thirteen-year-old Tess feels abandoned when Gaby, six years older, shocks the whole family by enlisting in the military. Worse, Tess must reluctantly accept the responsibility to care for Gaby's feisty horse. Flood nicely captures Tess' anxiety as she makes several attempts to befriend her sister's aggressive stallion, as well as her sadness as a lone sibling left behind. She feels out of place both at boarding school in Flagstaff, where she's taunted for being an "Indian," and at home on the Rez, where kids call her an "apple": red on the outside but white on the inside. She slowly comes to peace with her sister's absence and her own identity during a summer idyll with her grandmother, taking care of the family's sheep in the canyon. Tess narrates her story with a healthy sprinkling of Navajo, and though she is likably earnest, there is a lot of telling—to Gaby, her family, and readers—about her cultural clashes with her peers and not enough showing. This story loses its way by not letting readers into the modern world of the Native American teenager, who would more likely write rap songs than ceremonial poetry. At times Tess' grandmother feels more part of that world, with her purchase of Day-Glo green sneakers, than Tess does. Heartfelt and poignant, the tale nevertheless feels a little out of touch.
- Kirkus Reviews

Thirteen-year-old Tess is part white, part Native American, and she lives a split life between her white boarding school and the Navajo reservation. Tess joins her grandma for summer "sheep camp", where she helps care for the flock and experiences important revelations that help her bridge her two cultures.
—Book Links, included in Middle Grade Mania roundup