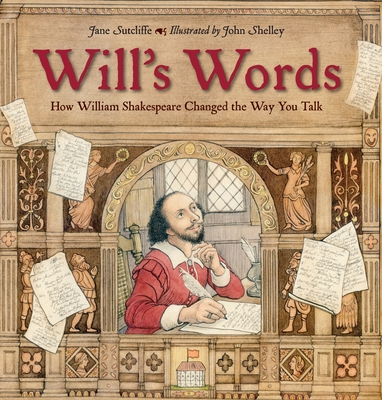 When Jane Sutcliffe sets out to write a book about William Shakespeare and the Globe Theatre, in her own words, she runs into a problem: Will's words keep popping up all over the place! What's an author to do? After all, Will is responsible for such familiar phrases as "what's done is done" and "too much of a good thing." He even helped turn "household words" into household words.

But, Jane embraces her dilemma, writing about Shakespeare, his plays, and his famous phrases with glee. After all, what better words are there to use to write about the greatest writer in the English language than his very own?  As readers will discover, "the long and the short of it" is this: Will changed the English language forever.

Backmatter includes an author’s note, a bibliography, and a timeline.

JANE SUTCLIFFE is author of Stone Giant: Michelangelo’s David and How He Came to Be, The White House Is Burning: August 24, 1814, and more than two dozen other books for children. Jane lives in Tolland, Connecticut.

JOHN SHELLEY grew up near Shakespeare’s birthplace at Stratfordupon-Avon. He has illustrated more than forty children’s books, including Stone Giant: Michelangelo’s David and How He Came to Be and Family Reminders. John lives in Norwich, England.

*Focusing on the now commonplace words that Shakespeare introduced into the English language, Sutcliffe describes the inner workings of the Globe Theatre and the Bard’s genius. The verso of each spread presents historical facts about Elizabethan London and the theatrical tradition it spawned, with Shakespeare’s words interspersed amid Sutcliffe’s lively prose, while the recto highlights the words, explains their meanings (both original and contemporary), and cites their usage in the poet’s plays. Shelley’s meticulously detailed painted pen-and-ink drawings brim with life and convey a clear sense of 1606 London, “a bustling, jostling, clinging, singing, stinking, head-chopping, pickpocketing wonder of a city,” while still managing to individualize the personages both onstage and off. They are perfectly married to Sutcliff’s concise, humorous, fact-filled prose. While the author references the few known truths of Shakespeare’s life, the emphasis is on his once-inventive but now familiar words, thus setting this title apart from most standard biographies. Readers will discover the origins of basic terms and expressions, such as hurry, fashionable, and cold-blooded. The book opens and concludes with a letter from Sutcliffe laying out her intentions in penning this work and discussing what we know of Shakespeare’s life. Pair this gem with Diane Stanley and Peter Vennema’s Bard of Avon: The Story of William Shakespeare (Morrow, 1992) for a full portrait of Shakespeare’s genius. VERDICT A beautifully presented, original approach to the playwright’s lasting contributions to the English language.
-School Library Journal, starred review

Sutcliffe presents an enjoyable, if slightly rocky, introductory reconnaissance into Shakespeare's wordplay. Shakespeare could turn a phrase, and Sutcliffe brings a number of them to readers' attention, smartly worked into a vest-pocket history of London theater during Shakespeare's days. Shelley's artwork is a lively accompaniment, delicate in color and linework but bustling as only a big population in small confines can be. Each double-page spread presents a few paragraphs of text about London theater on verso, the occasional word or phrase printed in boldface. On recto are boxed items that give the meanings of the highlighted words—and how some have changed considerably: "wild-goose chase" meant a horse race with the leader and followers in the shape of geese in flight; now it means a useless search. The location of the words in Shakespeare's works is also provided, and there's a handy timeline at the end of the book. There are gems—"too much of a good thing," "a sorry sight," "foul play" ("fair play," too)—but then there are some complete mysteries: "excitement," "fashionable," "well behaved," all of which underwhelm. Why bother with these when there are so many goodies to choose from? "Crack of doom," "break the ice," "brave new world"—treasures all. Still, even if what's done is done, there is absolutely no need to knit a brow or make short shrift of this well-tempered piece of work.
-Kirkus Reviews

Despite both title and subtitle, the value of this picture book lies in its delightful, realistic illustrations and the simple text's introduction to Elizabethan theater. About 30 terms Shakespeare either coined or made common are included meaningfully in the narrative, a pair or so on each two-page spread. The narrative itself explains the place of theater in Londoners' daily lives (for both audience members and actors), the Globe Theatre's architecture, and how Shakespeare's verbal richness spread into daily figures of speech. But it's the illustrations that steal the show. Each spread is crowded with intricate, colorful details that seem to spring to life in, for instance, a cutaway of backstage actions, the crowd arriving for an afternoon's performance, how different social classes positioned themselves during the play, London street scenes, and so on. These watercolor and pen-and-ink images invite endless searching of the crowds' unique faces and Thames River vistas.
-Booklist