Wangari Maathai: The Woman Who Planted Millions of Trees (Paperback) 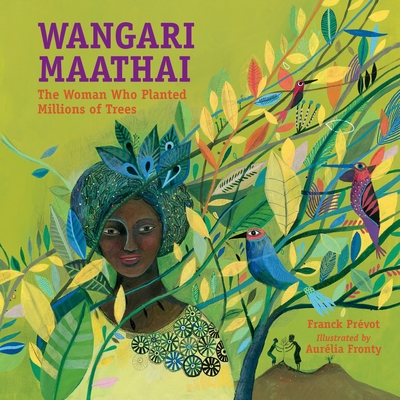 Wangari Maathai changed the way the world thinks about nature, ecology, freedom, and democracy, inspiring radical efforts that continue to this day.This simply told story begins with Green Belt Movement founder Wangari Maathai’s childhood at the foot of Mount Kenya where, as the oldest child in her family, her responsibility was to stay home and help her mother. When the chance to go to school presented itself, she seized it with both hands. She traveled to the US to study, where she saw that even in the land of the free, black people were not welcome.

Returning home, Wangari was determined to help her people and her country. She recognized that deforestation and urbanization was at the root of her country’s troubles. Her courage and confidence carried her through adversity to found a movement for peace, reconciliation, and healing.

Aurélia Fronty’s beautiful illustrations show readers the color and diversity of Wangari’s Africa—the green trees and the flowering trees full of birds, monkeys, and other animals; the roots that dig deep into the earth; and the people who work and live on the land.

Franck Prévot studied in Lyon then in Paris. He lives in France and divides his time between his family, his pupils, writing, and meetings with his readers. Aurelia Fonty attended the school of the Arts Appliqués Duperré, Paris. She specialized in textile creation and design. She briefly worked with Christian LeCroix and freelanced as an illustrator and textile designer. She has worked as an illustrator with many publishers. She lives in France.

*Wangari Maathai's biographical details, including, of course, her creation of Kenya's Green Belt Movement, are explicitly linked to feminist and human rights issues during her lifetime in this picture book. After an introduction to Wangari Maathai as a woman who "carried out her important work with important people"—and an immediate, affirming reference to "village women" as important people—the text moves into a present-tense description of the life and times of Wangari, "she who belongs to the leopard." Every double-page spread features striking, stylized artwork in lush colors, enhancing a thoughtful text. Predominant Kenyan attitudes toward women are boldly laid out: "Who is this woman who confronts them [Kenya's governing males] with a confident voice in a country where women are supposed to listen and lower their eyes in men's presence?" Similarly, the United States is indicted for its treatment of blacks during Wangari's years of education there, and President Daniel arap Moi is exposed as both an anti-environmentalist and a man "who orders police to shoot at crowds of demonstrators." The effects of British colonialism and tribal differences are also economically folded in. The biography officially concludes with Maathai's Nobel Peace Prize and is followed by an abundance of further information. This slim but emphatic biography stands out among others about Wangari Maathai with its well-crafted treatment of political issues.
- Kirkus Reviews, *starred review

*Prevot offers a gorgeous addition to the several books already available on Kenyan environmentalist and political activist Wangari Maathai, with as much biographical information as the pages can support. The writing is artful, clear, and concise, with references to Maathai’s native Swahili language and the cultural connections to the environment. This book provides students a beginning for research on her early life through the political turmoil of a corrupt Kenyan government which fell in 2002; it will also support deeper understanding of how she earned the Novel Peace Prize in 2004 for starting the Green Belt Movement, an NGO dedicated to planting trees, protecting the environment, and promoting women’s rights. Fronty’s art shines bright, expanding the text with styles that echo Henri Rousseau, Henri Matisse, and others. Of the other picture book biographies on Maathai, most focus on the tree planting rather than her life; this one offers appropriate information about the political upheavals that influenced Maathai.
-School Library Journal, *starred review

Dramatic and dreamlike paintings celebrate Nobel Peace Prize–winner Wangari Maathai, founder of the Green Belt movement. As a child in Kenya, Maathai learned the importance of nurturing forests, and after receiving her high-school diploma “at a time when very few African women even learn[ed] to read,” she traveled to the U.S. There, she studied the connections between environmental destruction, poverty, and oppression before returning to Kenya: “She asks that people think about the future even if the present is harsh and difficult.” Fronty’s fluid artwork incorporates organic motifs and African textile patterns to stirring effect, and extensive appended materials offer powerful supplemental information to conclude this standout tribute to Maathai’s perseverance and hard-won successes.
-Publishers Weekly, *starred review