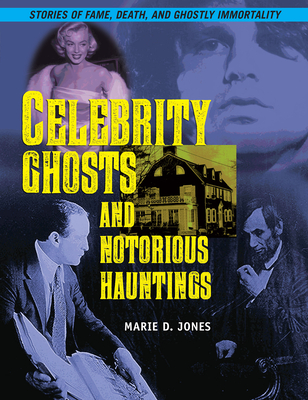 From old Hollywood silent film stars to rock stars to athletes, past presidents, and famous generals, celebrated individuals sometimes become celebrity ghosts, and they haunt their homes, workplaces, and even burial places. In turn, those places become famous, even notorious, thanks to the ghost that is haunting it

Celebrity Ghosts and Notorious Hauntings looks at many famous ghosts--dead celebrities that haunt old Hollywood locales, famous generals that appear to witnesses at great battlefields, and noted politicians that roam the hallways of courthouses, statehouses, and even the White House Plus, this fascinating frightfest examines the famous haunted locations themselves, such as the Hollywood Roosevelt Hotel, the Hotel del Coronado, Gettysburg, the Stanley Hotel (which inspired Stephen King's The Shining) and so many others that claim the supernatural as part of their heritage and history.

This riveting look at the unexplained also investigates movie lore, including the unsettling incidents on the Amityville Horror set; "The Dark Knight" curse that includes on-set accidents from the horrible death of Heath Ledger, who played the Joker, to the mass shooting at a midnight screening of The Dark Knight Rises; the deaths and curse surrounding The Matrix; the Infamous Stage 28 at Universal Studios; and Paramount Studios' long history of hauntings and strange goings-on.

Marie D. Jones is the author of over fifteen nonfiction books on the paranormal, conspiracies, ancient knowledge, unknown mysteries, and cutting-edge science, including Visible Ink Press' Demons, the Devil, and Fallen Angels plus PSIence: How New Discoveries in Quantum Physics and New Science May Explain the Existence of Paranormal Phenomena; 2013: End of Days or a New Beginning; Supervolcano: The Catastrophic Event That Changed the Course of Human History; and The Deja Vu Enigma. She is a regular contributor to New Dawn Magazine, FATE, Paranoia Magazine and other periodicals. Jones has been interviewed on over a thousand radio shows worldwide, including Coast-to-Coast AM, and has appeared on History Channel's Ancient Aliens. She makes her home in southern California.