About a Boy (Paperback) 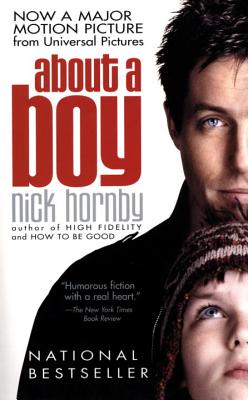 A wise, hilarious novel from the beloved, award-winning author of Funny Girl, High Fidelityand A Long Way Down.

Will Freeman may have discovered the key to dating success: If the simple fact that they were single mothers meant that gorgeous women – women who would not ordinarily look twice a Will – might not only be willing, but enthusiastic about dating him, then he was really onto something. Single mothers – bright, attractive, available women – thousands of them, were all over London. He just had to find them.

SPAT: Single Parents – Alone Together. It was a brilliant plan. And Will wasn’t going to let the fact that he didn’t have a child himself hold him back. A fictional two-year-old named Ned wouldn’t be the first thing he’d invented. And it seems to go quite well at first, until he meets an actual twelve-year-old named Marcus, who is more than Will bargained for…

Nick Hornby is the author of six internationally bestselling novels (High Fidelity, About a Boy, How to be Good, A Long Way Down, Slam and Juliet, Naked) and several works of  non-fiction including Fever Pitch, Songbook and Ten Years In The Tub, a collection of his 'Stuff I've Been Reading' columns from the Believer.  His screenplay for the film An Education was nominated for an Academy Award. He lives in Highbury, north London.

"A follow up to High Fidelity...About a Boy is an acerbic, emotionally richer yet no less funny tale...shrewdly hilarious."—Entertainment Weekly

"Hornby is a writer who dares to be witty, intelligent and emotionally generous all at once. He combines a skilled, intuitive appreciation for the rigors of comic structure with highly original insights about the way the enchantments of popular culture insinuate themselves into middle-class notions of romance."—The New York Times Book Review

"The conversations between Will and Marcus are hilariously loopy."—The Boston Globe

"An utterly charming, picaresque tale of an older guy, a young kid, and the funky, dysfunctional real-life ties that bind—and unbind."—Vogue