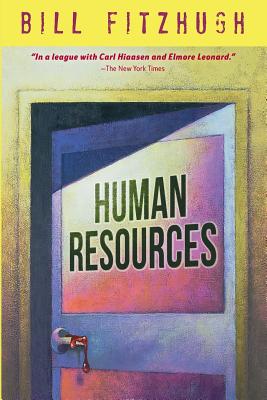 By Bill Fitzhugh
Email or call for price.
Not Available at This Time

Jake Trapper isn't your average organ acquisition specialist. He's the best in L.A. But Jake has a soft spot for underdogs and his current case is Angel, a young girl from a broken home. She needs a kidney. So Jake makes a deal with a broker and gets seduced into the kidney business. When a potential organ donor is killed, Jake meets LAPD Homicide Detective Megan Densmore who enlists Jake to help with the investigation. Enter Special Agent Fuller, a Fed looking into the black market angle. He's an oddball with an architecture fetish and an endless supply of strange tales to tell. As more bodies surface, Special Agent Fuller turns a suspicious eye toward Jake and the noose tightens, threatening to reveal Jake's dirty little secret. Human Resources is a darkly comic thriller with heart, and lungs, and kidneys...and a botched monkey kidnapping.

Bill Fitzhugh is the award-winning author of "Pest Control," "Highway 61 Resurfaced" and many others. The New York Times called him a "strange and deadly amalgam of screenwriter and comic novelist. His facility and wit (and his taste for the perverse) put him in a league with Carl Hiaasen and Elmore Leonard." His books have been translated into half a dozen languages and "Pest Control" was turned into a stage musical in Los Angeles, as well as a radio drama in Germany, while the film rights sold to Warner Brothers. Universal Studios bought the film rights to his satire, "Cross Dressing." Fitzhugh has published several short stories, has written many screenplays, and is currently working on a stage play. "Human Resources" is his tenth novel. Prior praise for Fitzhugh... "Wickedly, irredeemably funny, Bill Fitzhugh has nailed the truest depiction of Nashville since Hank went to Jesus." Kinky Friedman on "Fender Benders." "Bill Fitzhugh is a seriously funny guy!" Molly Ivins, author and humorist, commenting on "Pest Control" and "The Organ Grinders." "Bill Fitzhugh is a deeply disturbed individual who uses his warped talents to write very funny novels..." Carl Hiaasen, author of "Razor Girl" and many other classic comic novels. "One of the premier writers of comic mysteries... Bill Fitzhugh leaps into that elite bunch of crime writers such as Carl Hiaasen and Donald Westlake." Fort Lauderdale Sun-Sentinal on "Heart Seizure." "It's not easy walking the tightrope between medical thrillers a la Crichton and absurdist black comedy in the Hiaasen mold. But Fitzhugh manages it smoothly" Booklist, on "The Organ Grinders." "One of the funniest, most off-beat thrillers in years... an action-packed plot stuffed with streetwise lines and larger than life characters." The Times (London) on "Pest Control." "Offbeat, engaging, and very funny... Reads like "Naked Lunch" written by a sober William Burroughs." Washington Post Book World, on "The Organ Grinders." "Riotously funny... combining the savagery of Tom Sharpe with the light-heartedness of Donald E. Westlake." Bookpage on "Cross Dressing." "Smart, fast, and funny. Fitzhugh is a dangerous man." Kirkus Reviews on "Cross Dressing." "The perfect antidote to CNN...easy reading and laugh out loud funny." Publishers Weekly on "Heart Seizure."