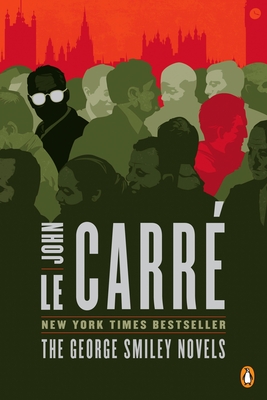 A boxed set of the first eight George Smiley novels by the legendary John le Carré, including the The Spy Who Came in From the Cold and Tinker, Tailor, Soldier, Spy

With the publication of A Legacy of Spies in September - the first George Smiley novel in over twenty-five years - John le Carré fans can delve into the first eight novels featuring his most beloved character to revisit the spymaster's backstory, and it is the perfect way to introduce new readers to the espionage classics.

The set includes eight of John le Carré iconic George Smiley novels: Call for the Dead; A Murder of Quality; The Spy Who Came in from the Cold; The Looking Glass War; Tinker, Tailor, Soldier, Spy; The Honorable Schoolboy; Smiley's People; and The Secret Pilgrim.

John le Carré was born in 1931. For six decades, he wrote novels that came to define our age. The son of a confidence trickster, he spent his childhood between boarding school and the London underworld. At sixteen he found refuge at the university of Bern, then later at Oxford. A spell of teaching at Eton led him to a short career in British Intelligence (MI5&6). He published his debut novel, Call for the Dead, in 1961 while still a secret servant. His third novel, The Spy Who Came in from the Cold, secured him a worldwide reputation, which was consolidated by the acclaim for his trilogy Tinker Tailor Soldier Spy, The Honourable Schoolboy, and Smiley’s People. At the end of the Cold War,  le Carré widened his scope to explore an international landscape including the arms trade and the War on Terror. His memoir, The Pigeon Tunnel, was published in 2016 and the last George Smiley novel, A Legacy of Spies, appeared in 2017. He died on December 12, 2020.

“One of our great writers of moral ambiguity, a tireless explorer of that darkly contradictory no-man’s land.”
—Los Angeles Times

“No other writer has charted—pitilessly for politicians but thrillingly for readers—the public and secret histories of his times.”
—The Guardian (UK)

“I would suggest immortality for John le Carré, who I believe one of the most intelligent and entertaining writers working today.”
—Alan Cheuse, Chicago Tribune

“The constant flow of emotion lifts le Carré not only above all modern suspense novelists, but above most novelists now practicing.”
—Financial Times

“A writer of towering gifts.”
—The Independent (UK)