Mission to the Moon: The Mystery of Entity303 Book Three: A Gameknight999 Adventure: An Unofficial Minecrafter's Adventure (Gameknight999 Series) (Paperback) 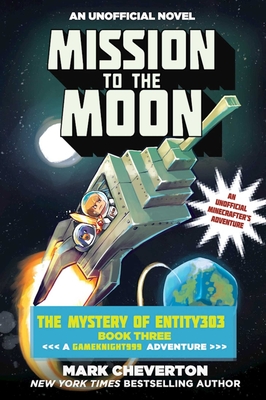 New York Times bestselling author. What is more fun for boys and girls than playing Minecraft? Going on an adventure right into the game itself!

Entity303, the cruel villain who has poisoned vanilla Minecraft with dangerous and bizarre mods, was able to escape the sky-islands of Mystcraft, leaving the surface of Minecraft in a giant rocket. Gameknight999 knows Weaver must be sent back into the past so the timeline can be repaired and the eventual destruction of all the Minecraft worlds can be stopped. But to send him back, they must find the time-traveling portal that brought Weaver to the future. And only Entity303 knows the location.

They have no choice; Gameknight999 and his friends must follow behind, landing on a strange and barren lunar landscape, a world stranger and more alien (in more ways than one) than any other Minecraft mod. It’s here that they must battle outer space mobs, combat monster bosses, and find Entity303. But as they close in on the terrible user, Gameknight999 will discover Entity303’s real scheme, and the very thought of what the evil user plans will fill everyone with terror. Can the User-that-is-not-a-user catch Entity303 as he travels through the cold reaches of universe, before it’s too late?

Come along with Gameknight999 on his most thrilling adventure yet, to a biome unlike anything else in the Overworld: outer space!

This adventure series is created especially for readers who love the fight of good vs. evil, magical academies like Hogwarts in the Harry Potter saga, and games like Minecraft, Terraria, and Pokemon GO.

Mark Cheverton is a former high school physics and math teacher and the father of a Minecraft fanatic. He is the creator of the New York Times bestselling Gameknight999 series, action-adventure books set in the world of Minecraft conceived as a way to teach children the dangers of online bullying.