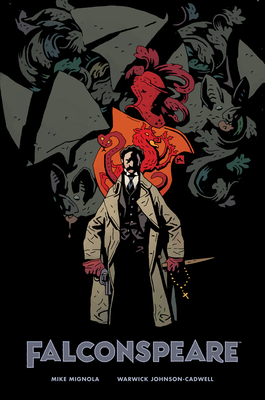 Jump into an eerie Victorian-style mystery with an off-kilter, charming twist in the next knockout collaboration from Mike Mignola and Warwick Johnson-Cadwell!

Monster hunters extraordinaire Professor Meinhardt, Mr. Knox, and Ms. Van Sloan have teamed up to slay spooks and investigate the uncanny before, but now they'll tackle a question that's haunted them for years: What happened to their friend and vampire slayer extraordinaire, James Falconspeare?

Rendered in Johnson-Cadwell's signature loose, expressive style, and with gorgeous cover from Mignola and colorist Dave Stewart, this hardcover will be a treat for fans of Mr. Higgins Comes Home and Our Encounters with Evil as well as folks new to the world Johnson-Cadwell and Mignola have created.

Mike Mignola's fascination with ghosts and monsters began at an early age; reading Dracula at age twelve introduced him to Victorian literature and folklore, from which he has never recovered. Starting in 1982 as a bad inker for Marvel Comics, he swiftly evolved into a not-so-bad artist. By the late 1980s, he had begun to develop his own unique graphic style, with mainstream projects like Cosmic Odyssey and Batman: Gotham by Gaslight. In 1994, he published the first Hellboy series through Dark Horse. There are thirteen Hellboy graphic novels (with more on the way), several spin-off titles (B.P.R.D., Lobster Johnson, Abe Sapien, and Sir Edward Grey: Witchfinder), prose books, animated films, and two live-action films starring Ron Perlman. Along the way he worked on Francis Ford Coppola's film Bram Stoker's Dracula (1992), was a production designer for Disney's Atlantis: The Lost Empire (2001), and was the visual consultant to director Guillermo del Toro on Blade II (2002), Hellboy (2004), and Hellboy II: The Golden Army (2008). Mike's books have earned numerous awards and are published in a great many countries. Mike lives in Southern California with his wife, daughter, and cat.