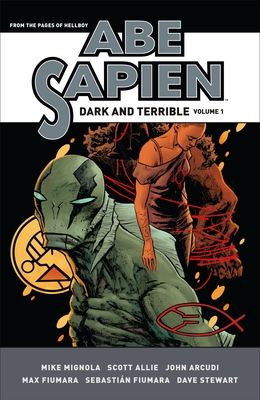 On the run from the B.P.R.D., a newly mutated Abe Sapien--more inhuman than before--travels across a United States transformed and overrun by monsters. Abe's search for the truth about himself--or his race away from his fate--mirrors the quest of an ancient necromancer to seize control of a world literally going to hell.

This deluxe hardover edition collects Abe Sapien volumes 3-5 (the beggining of the Dark and Terrible story), plus an expanded sketchbook section.

Mke Mignola began his career in 1980 by illustrating spots in the Comic Reader. His first published piece was in the Comic Reader #183, a spot illustration of Red Sonja (pg. 9). His first published front cover was the Comic Reader #196; Dominic Fortune, the Spirit, and Doc Savage in November of 1981. Mike Mignola began inking in August of 1983 for Marvel Comics. He inked issues of comic books such as Daredevil (#197 'Introducing' him), Power Man & Iron Fist. Mignola is particularly noted for his highly distinctive style, which was once called "German expressionism meets Jack Kirby" by Alan Moore, in an introduction to a collection of Mignola's Hellboy works. While Mignola has heavily influenced a new generation of comics artists since he began working on Hellboy, he was something of an odd man out in the superhero comics industry in the beginning of his career. Mignola's imagery stood in stark contrast to the style of his contemporaries. Where others would draw muscular men and slim, well-endowed women, Mignola's characters were usually bulky and rough-looking, and more often than not defined by large shadowed areas rather than fine details. Mignola often takes the same approach to architecture, particularly in Hellboy, where he often sets the scenes in slowly dilapidating Victorian and Gothic surroundings. He also commonly draws machines that feature steampunk imagery. Hellboy was made into a feature film in 2004 by director Guillermo del Toro. Mignola was closely involved with the movie's production and a sequel is currently in development. Recently, Hellboy has been made into two direct-to-video animated films, Sword of Storms and Blood and Iron in 2007. Prior to that, Mignola worked as an illustrator for Francis Ford Coppola's 1992 movie Bram Stoker's Dracula. He was also the production designer for the Disney feature film, Atlantis: The Lost Empire in 2001, and was a concept artist for 2002's Blade II, also directed by del Toro. Mignola's The Amazing Screw-On Head debuted in 2006 on the Sci-Fi Channel, starring the voices of Paul Giamatti and David Hyde Pierce