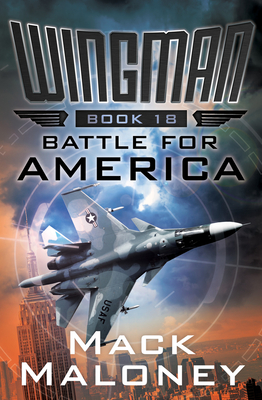 This is book number 18 in the Wingman series.

An ace fighter pilot aims to save a shattered America from Russian invasion in this new Wingman novel from "the best high-action thriller writer out there" (Jon Land). Former US Air Force major Hawk Hunter and his band of patriotic ex-military men have fought tirelessly to reunite their fractured nation after the Russian nuclear sneak attack that put a devastating end to World War III. Now, returning from a space odyssey that began with the diversion of a comet headed for Earth, Hunter finds a 60,000-man Russian army occupying New York City, ready to invade the rest of America. Equally alarming are reports claiming that Hawk's former girlfriend, Dominique, is living with the head of the Russian secret police in a Manhattan penthouse. Buzzing through the city's skyscraper canyons in a tiny STOL Highlander and glimpsing the enemy invaders' massive weaponry for himself, Hawk realizes he's up against the greatest danger his homeland has ever faced, even with the help of Captain "Bull" Dozer and his team of ex-Marines. But with the woman and the country he loves in dire peril, threatened by a mysterious convoy of Russian superships, the Wingman will apply all his aviation prowess and strategic ingenuity to devise a plan to launch the fiercest, most crucial battle for America yet, no matter the risks. Filled with fast-paced, furious action and a wide range of aircraft and military hardware that will fascinate techno-thriller fans, Battle for America brings back favorite characters from earlier books in the series and delivers a riveting story that reveals new insight on America's most enigmatic hero: the Wingman.

Mack Maloney is the author of numerous fiction series, including Wingman, Super Hawks, Chopper Ops, Starhawk, and Pirate Hunters, as well as UFOs in Wartime: What They Didn't Want You to Know. A native Bostonian, Maloney received a bachelor of science degree in journalism from Suffolk University and a master of arts degree in film from Emerson College. He is the host of a weekly national radio show, Mack Maloney's Military X-Files, and was a consultant for a government-funded research firm working with US intelligence agencies on antiterrorism programs. Visit him on Facebook and at www.mackmaloney.com.