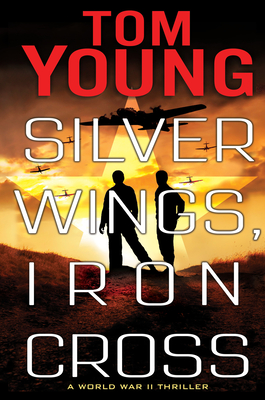 World War II Lieutenant Karl Hagan earned his wings the hard way. But when his plane is shot down behind enemy lines, he’s forced to make the hardest decision of his life: trusting the enemy.

Oberleutnant Wilhelm Albrecht wore his Iron Cross with pride. But when his U-boat is attacked in a devastating air raid, he abandons ship and finds an unlikely ally: the pilot who bombed him.

From the smoke-filled skies over Europe to the fire-blasted waters of a Nazi naval base to the battle-scarred German countryside, the American and the German must form an uneasy truce if they hope to survive. It is November of 1944. The tides of war have turned. Allies have taken back France, and German troops have retreated. But for Karl and Wilhelm, the war is far from over. Each must be prepared to lie for the other, fight for the other, or die with the other. But their short-lived alliance won’t truly be put to the test until they reach the end of the line—inside a POW camp . . .

Thrillingly tense, blisteringly authentic, and emotionally powerful, Silver Wings, Iron Cross is an unforgettable novel of World War II that’s sure to become a classic in the field.

Tom Young logged nearly 5,000 hours as a flight engineer for the Air National Guard in Afghanistan, Iraq, Bosnia, Kosovo, and elsewhere, including Latin America, the Horn of Africa, and the Far East. His military honors include three Air Medals, three Aerial Achievement Medals, and the Air Force Combat Action Medal. He retired from the military as a Senior Master Sergeant.

"[An] exciting WWII thriller...Young makes it work thanks to authentic detail and plenty of convincing background information on the two principals as well as on almost every one of the secondary characters.  Genre fans will find a lot to like."
—Publishers Weekly

“One of the most exciting new thriller talents in years!”
—Vince Flynn

“Courage and honor in the face of the enemy have not been so brilliantly portrayed
since the great novels of the Second World War.”
—Jack Higgins

“A gutsy, gritty thriller told only as one who’s been there and done that could write
It . . .  [a] terrific new writer.”
—W.E.B. Griffin

“A page-turner that might’ve been torn from today’s headlines . . .  engrossing, enlightening, and extremely entertaining.”
—Doug Stanton

“Young has a gift for allowing the reader to experience the emotional aspect of being a soldier. . . . Military-thriller fans should make Young’s work an essential addition to their reading lists.”
—Booklist (starred review)