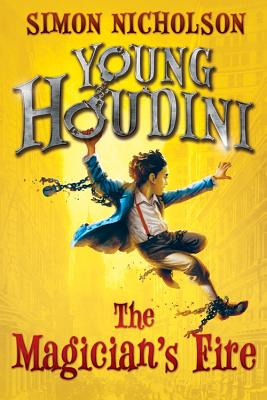 By Simon Nicholson
$7.99
On Our Shelves Now

This is book number 1 in the Young Houdini series.

"This series opener is action-packed and fast-paced... will appeal to fans of the '39 Clues.'" -School Library Journal

Young Harry Houdini spends his days chaining himself to train tracks and teetering on wires high above the city with his two best friends, Arthur and Billie. But when Harry's friend and magical mentor, Herbie, disappears, the three friends band together, determined to rescue the beloved magician.

With nothing more than a mysterious puff of purple smoke, an ominous threat, and a menacing Bulgarian for evidence, Harry, Arthur, and Billie embark on a dangerously thrilling investigation that pushes their skill, and friendship, to the limits. But can Harry find Herbie before it's too late?