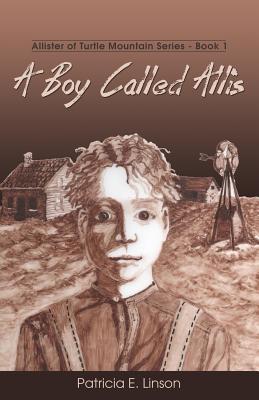 This is book number 1 in the Allister of Turtle Mountain series.

Eleven-year-old Allister McRuer's fears materialize when he and his
family arrive at their Manitoba pioneer homestead in 1892. What could make
it worse? Being called Allis.

During the trip from Lachute, Quebec to Cherry Creek, Manitoba, Allister
shares a train boxcar with three of his brothers and all of their family's
livestock. The closer he gets to the homestead his father and oldest
brother, John, started three years ago, the worse Allister's misery gets as
older brother, Will, torments Allister by calling him "Allis," a name he
hates because it sounds like "Alice."

Allister's first hour in Cherry Creek does little to ease his concerns.
While their brothers unload the McRuers' two boxcars, Allister and his twin
brother, Jim, explore the town. Allister is discouraged at the small size of
the local school, wondering how he will ever finish grade eight.

As they continue walking, Allister and Jim witness a terrible accident.
Although they're able to help a horse and an injured driver, Allister's
anxiety over his family's move to the prairies takes a new turn when he's
told that the only doctor within seventy miles is out of town on another
call. Who can he get to help them?