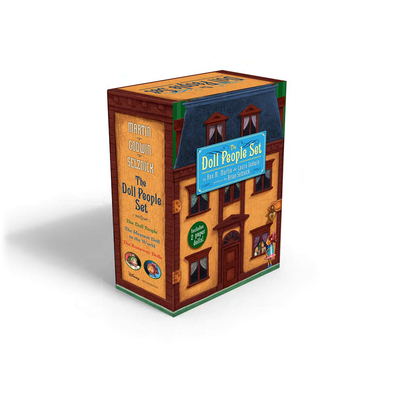 This is book number 1 in the The Doll People series.

Annabelle Doll is eight years old-she has been for more than a hundred years. Not a lot has happened to her, cooped up in the dollhouse, with the same doll family, day after day, year after year. . . until one day the Funcrafts move in.

ANN M. MARTIN is the author of many books for young readers, including the Baby-Sitters Club series, the Main Street series, the Family Tree series, Rain Reign, Belle Teal, A Dog's Life, and A Corner of the Universe, a 2003 Newbery Honor Book. She is also the co-author, with Paula Danziger, of P.S. Longer Letter Later and Snail Mail No More. Ms. Martin makes her home in upstate New York.

LAURA GODWIN, also known as Nola Buck, is the author of many popular picture books for children, including A Christmas GoodnightOne Moon, Two CatsThis is the Firefighter and Christmas in the Manger. Born and raised in Alberta, Canada, she now lives in New York City.


Brian Selznick is the author and illustrator of the New York Times best-selling The Invention of Hugo Cabret, winner of the 2008 Caldecott Medal and a National Book nominee. He has also illustrated many other books for children, including Frindle by Andrew Clements, Amelia and Eleanor Go for a Ride by Pam Muñoz Ryan, and The Dinosaurs of Waterhouse Hawkins by Barbara Kerley, which received a 2001 Caldecott Honor. Brian lives in Brooklyn, New York, and San Diego, California.