The Long Way Home (The Adventures of Henry Whiskers #2) (Paperback) 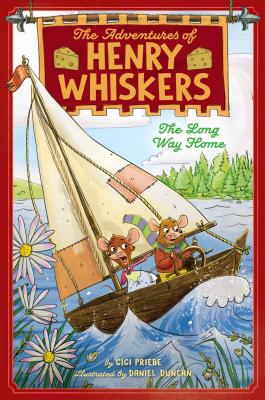 This is book number 2 in the The Adventures of Henry Whiskers series.

Henry Whiskers and his cousin, Jeremy, must find their way back home—Queen Mary’s dollhouse—and to Windsor Castle with the help of a mysterious treasure map in this fun, fast-paced follow up to The Adventures of Henry Whiskers.

Little Henry Whiskers is thrilled when he discovers an old, crinkly map, complete with a giant X marking a spot, full of treasure—at least, that’s what Henry thinks. All he knows is that this map is something BIG—he can feel it right down to the tip of his tail.

But before he can share his exciting find with his cousin and best friend, Jeremy, they find themselves in the danger zone: The Windsor Castle Kitchen. And after being unceremoniously caught and thrown out of the castle, with nothing but the map, the two little mice realize they have bigger problems than being caught in the kitchen! How will they get back to the dollhouse?

With the help of his cousin, Jeremy and a fellow field mouse named Wisely, the cousins battle a hungry falcon, an endless and stormy lake, and the maze of landmarks on the Windsor Castle Grounds as they try to find his way back home—and discover the mysterious map is more connected to the Whiskers family than either of them could have ever imagined.

Gigi Priebe is the mother of three, the founder of Stepping Stones, an award-winning children’s museum in Norwalk, Connecticut and the author of The Adventures of Henry Whiskers, the first in her middle grade series. When she is not writing¾or rewriting¾she is a philanthropic advisor and community volunteer in Fairfield County, Connecticut, where she lives with her husband, a cat named Tigger, a dog named Clover, and probably some mice.

Daniel Duncan is an illustrator living in the UK who creates most of his work in an old stable turned studio. His work takes inspiration from cinema, old photos, and sports. Duncan graduated from Middlesex University with First Class Honours, and a bachelor’s degree in illustration. He was highly commended by Macmillan for the 2013 Children’s Book Competition, as well as being shortlisted for the 2014 AOI awards for the Children’s Books New Talent category.