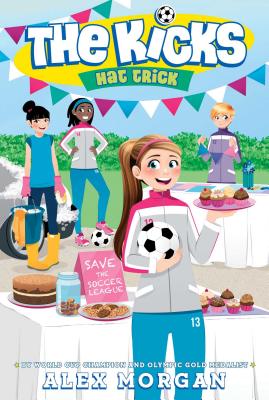 The Kicks are dedicated to soccer and to friendship—but can they balance all their goals? Find out in book four in the fun and empowering New York Times bestselling middle grade series from star soccer player and Olympic gold medalist Alex Morgan.

Now that playoffs are over, the Kicks won’t be playing together again until the spring. But soccer-crazy Devin can’t imagine a life without soccer! She and her friends decide to try out for a travel team in a very competitive local league, but not everyone makes the cut.

Meanwhile, Devin’s little sister, Maisie, wants to try out for her elementary school’s soccer program. But due to budget cuts, the program has been eliminated! The Kicks rally together to help raise money—and volunteer to help with four different projects on the same day!

Things get hectic as the girls deal with being on the competitive, tougher team; figuring out how to keep their friendships together as they all go in different directions; and trying to save the elementary school’s soccer program. If they can pull off all three, it will be a true hat trick!