Nights of the Moonless Sky: A Tale from the Vijayanagara Empire (Hardcover) 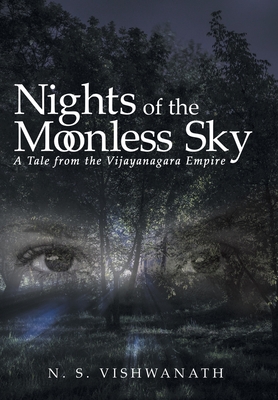 It is the sixteenth century in South India and the Vijayanagara Empire is in the throes of a succession struggle that threatens to disrupt the peace of the realm.
Far away from the chaos, the splendorous estate of Madhuvana sits in relative heaven where its seventy-year-old patriarch, Rajanna, has just died. After elders decree that his widows are to perform an ancient ritual in which a widow is cremated alive, the lives of three people intersect. Aadarshini is Rajanna's twenty-two-year-old third wife and mother of his heir. Azam Khan is Rajanna's trusted bodyguard, left rudderless after the death of his master. Prabhakara Swami is the enigmatic temple priest who holds the strings that control the fates of others. When Aadarshini is thrust into a forbidding darkness, she discovers what it means to become the hero of her own story as destiny tosses her around like a straw in the wind. While events in the capital close in around her, she must seize her fate and overpower not just those who want to see her down, but also her inner demons.
In this intriguing historical thriller, the widow of a South Indian patriarch embarks on a journey of self-discovery to take control of her destiny and survive in an uncertain world.

N. S. Vishwanath (Vish) earned a PhD from the University of Pennsylvania. After a career in technology development, he recalibrated his compass to pursue his long-time interests in writing, music, and history. Today, he divides his time between the New York area and Mysore (a South Indian town with a splendorous history). His website is www.storytellervish.com. Nights of the Moonless Sky is his first novel.