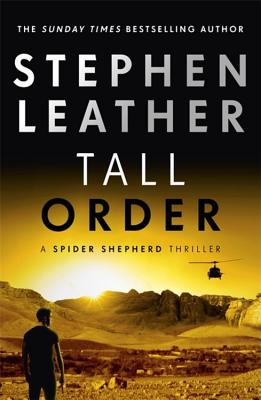 By Stephen Leather
Email or call for price.
Not Available at This Time

Revenge is a dish best served cold. But patience can be a tall order.

He is one of the world's most ruthless terrorists, codenamed Saladin. He plans and executes devastating attacks and then, ghost-like, he disappears.

Ten years ago he blew a plane out of the sky above New York - and now he's killed dozens in a London strike.

But one of the latest victims is related to the acting head of MI5, who knows exactly who she wants on the case: Spider Shepherd.

Dean Martin, a psychologically damaged former Navy SEAL, is the only person in the world who can identify Saladin. But Martin was killed ten years ago - wasn't he?

Shepherd must find Martin and take him back to the killing fields on the Afghanistan-Pakistan border. Revenge on the world's most wanted terrorist is long overdue, and Shepherd is determined to be the one to deliver it . . .

'A master of the thriller genre'
Irish Times

'As tough as British thrillers get . . . gripping'
Irish Independent

Stephen Leather is one of the UK's most successful thriller writers, an ebook and Sunday Times bestseller and author of the critically acclaimed Dan 'Spider' Shepherd series and the Jack Nightingale supernatural detective novels. Before becoming a novelist he was a journalist for more than ten years on newspapers such as The Times, the Daily Mirror, the Glasgow Herald, the Daily Mail and the South China MorningPost in Hong Kong. He is one of the country's most successful ebook authors and his titles have topped the Amazon Kindle charts in the UK and the US. His bestsellers have been translated into fifteen languages and he has also written for television.

Stephen also has a website for his Spider Shepherd series, www.danspidershepherd.com, and for his Jack Nightingale series, www.jacknightingale.com.

A master of the thriller genre—Irish Times

As tough as British thrillers get . . . gripping—Irish Independent