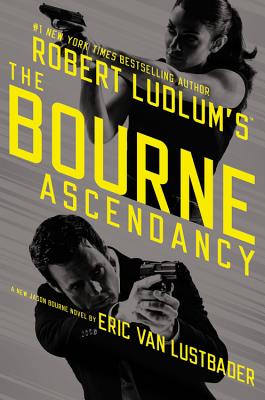 This is book number 12 in the Jason Bourne series series.

Jason Bourne is one of the most popular and compelling characters in contemporary fiction. Originally created by bestselling author Robert Ludlum, the Jason Bourne series was later adapted into films that have become modern classics. Now, New York Times bestselling writer Eric Van Lustbader carries on Jason Bourne's story with a new novel about the rogue secret agent who has lost his memory . . .

In this thrilling and absorbing new novel Jason Bourne is faced with an impossible mission. He has been hired to impersonate a high-level government minister at a political summit meeting in Qatar, shielding the minister from any assassination attempts. Suddenly, armed gunmen storm the room, killing everyone but Bourne. Their target, however, isn't the minister Bourne impersonates....it is Bourne himself.

Kidnapped and transported to an underground bunker, Bourne finds himself face-to-face with an infamous terrorist named El Ghadan ("Tomorrow"). El Ghadan holds as his captive Soraya Moore, former co-director of Treadstone, and a close friend to Bourne, along with her two year old daughter.

Meanwhile, the President of the United States is in the midst of brokering a historic peace treaty between the Israelis and the Palestinians-an event that El Ghadan is desperate to prevent. He demands that Bourne carry out a special mission: kill the President. If Bourne refuses, Soraya and her daughter will die.

Bourne must make a monstrous choice: save Soraya and her daughter, or save the President.

Eric Van Lustbader is most widely known as the New York Times bestselling author of twenty international bestselling thrillers, including Ninja and Black Heart. He is also the author of two successful and highly regarded series of fantasy novels, The Sunset Warrior Cycle and The Pearl Saga. His novels have been translated into over twenty languages. www.ericvanlustbader.com

"In the highly able hands of author Eric Van Lustbader, Bourne has seen a resurgence of terrific proportions...What Lustbader does best is to step into the shoes and skin of Jason Bourne, breathing life into a character who readers of espionage thrillers cannot get enough of. THE BOURNE ASCENDANCY will not disappoint."
—BookReporter.com

"THE BOURNE ASCENDANCY is everything you'd think a Bourne novel should be: relentless action, over-the-top deaths, moral ambiguity, and the fate of the world hanging in the balance... this is one you'll want to snatch up quickly."
—LifeIsStory.com

"Teeming with the usual intrigue and page-turning action."
—Star-Telegram (TX) on The Bourne Retribution

"Eric Van Lustbader keeps the action and plot moving forward, and the tension never lets up...readers most assuredly will be gasping for breath as each eye-opening chapter unfolds."
—Book Reporter on The Bourne Imperative

"Readers familiar with the story of Jason Bourne and Treadstone will be flipping pages as fast as they can...Van Lustbader pulls readers through the story with gusto...For series fans, a solid continuation of Bourne's story."
—Booklist on The Bourne Imperative

"Established fans will find all the usual cliffhangers, hairbreadth escapes, and multiple betrayals they expect from this series."
—Publisher's Weekly on The Bourne Imperative

"The twists, the nonstop action, and the multilayered plot that Ludlum fans expect are here in abundance. Fans of the Bourne films will eat this one up."
—Booklist on The Bourne Dominion

"Complicated, action-packed.... it's a testament to Lustbader's skills that he can keep everyone in place and blazing away without losing track of the ongoing plot."
—Publisher's Weekly on The Bourne Dominion

"Thriller addicts who love intricate webs of conspiracy mixed with an adrenaline rush of action and global adventure will snap this one up."
—Library Journal on The Bourne Objective