The Quest: A Novel (Mass Market) 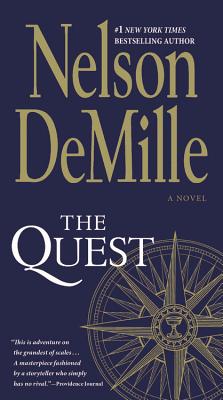 By Nelson DeMille
Email or call for price.
Not Available at This Time

AUTHOR'S NOTE:
An earlier, shorter version of The Quest was published in paperback in 1975.
In 2013, I rewrote The Quest and doubled its length, making it, I hope, a far better story than the original, without deviating from the elements that made the story so powerful and compelling when I first wrote it. In other words, what made The Quest worth rewriting remains, and whatever is changed is for the better.
I was happy and excited to have this opportunity to rewrite and republish what I consider my first "big" novel, and I hope you enjoy it as much as I did when I first wrote it.
BOOK DESCRIPTION:
A sweeping adventure that's equal parts thriller and love story, Nelson DeMille's newest novel takes the reader from the war torn jungles of Ethiopia to the magical city of Rome.
While the Ethiopian Civil War rages, a Catholic priest languishes in prison. Forty years have passed since he last saw daylight. His crime? Claiming to know the true location of Christ's cup from the Last Supper. Then the miraculous happens - a mortar strikes the prison and he is free!
Old, frail, and injured, he escapes to the jungle, where he encounters two Western journalists and a beautiful freelance photographer taking refuge from the carnage. As they tend to his wounds, he relates his incredible story.
Motivated by the sensational tale and their desire to find the location of the holiest of relics, the trio agrees to search for the Grail.
Thus begins an impossible quest that will pit them against murderous tribes, deadly assassins, fanatical monks, and the passions of their own hearts.
THE QUEST is suspenseful, romantic, and filled with heart-pounding action. Nelson DeMille is at the top of his game as he masterfully interprets one of history's greatest mysteries.

Nelson DeMille is a former U.S. Army lieutenant who served in Vietnam and is the author of nineteen acclaimed novels, including the #1 New York Times bestsellers Night Fall, Plum Island, The Gate House, The Lion, The Panther and Radiant Angel. His other New York Times bestsellers include The Charm School, Word of Honor, The Gold Coast, Spencerville, The Lion's Game, Up Country, Wild Fire, and The General's Daughter, the last of which was a major motion picture. For more information, you can visit NelsonDeMille.net.

Nelson DeMille wrote THE QUEST nearly 40 years ago. It has been fully rewritten, showcasing this masterful author's historical knowledge, understanding of the human psyche, and matchless entertainment skills. The novel crosses genres with its spiritualism, wit, adventure and romance, not to mention gripping action. Full of DeMille's characteristic --- and unparalleled --- humor and intelligence, THE QUEST delivers. Boy, does it deliver.
—Bookreporter.com

Nelson DeMille is at the absolute peak of his powers in "The Quest" (Center Street, 464 pages, $26) an epic tale that's broad in both scope and vision, harkening back to his earlier masterworks such as "The Charm School" and "By the Rivers of Babylon" as it brings the action in Africa of the mid-1970s. That's where an old priest named Father Armando emerges from a bombed-out prison after decades in captivity with the location of nothing less than the Holy Grail tucked in his mind.

From there, staged against the backdrop of the endless Ethiopian civil war, the quest of the title begins in search of it, undertaken by a trio of intrepid journalists (well, two plus a photographer), including the hard-bitten and hard-driving Frank Purcell, who's standing in for DeMille's redoubtable John Corey this time out. Purcell becomes our Robert Langdon as the book takes on the texture and feel of Dan Brown at his level best, chock full of mysticism, murderous monks, deadly assassins, and vengeful natives all on a quest to either find the Grail or make sure its secrets remain hidden forever.

This is adventure on the grandest of scales and richest of tapestries, Wilbur Smith and Fredrick Forsythe rolled into one with some Indian Jones tossed in for good measure. A masterpiece fashioned by a storyteller who simply has no rival.
—Providence Sunday Journal