The Blue Hour: A Novel (Hardcover) 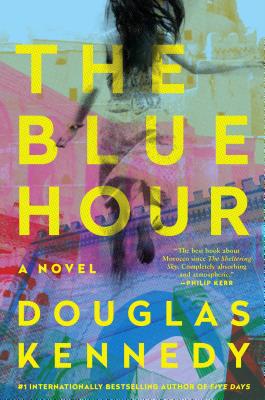 By Douglas Kennedy
Email or call for price.
Not Available at This Time

From the #1 internationally bestselling author of The Moment and Five Days comes “the best book about Morocco since The Sheltering Sky. Completely absorbing and atmospheric” (Philip Kerr).

Robin knew Paul wasn’t perfect. But he said they were so lucky to have found each other, and she believed it was true.

She is a meticulous accountant, almost forty. He is an artist and university professor, twenty years older. When Paul suggests a month in Morocco, where he once lived and worked, a place where the modern meets the medieval, Robin reluctantly agrees.

Once immersed into the swirling, white hot exotica of a walled city on the North African Atlantic coast, Robin finds herself acclimatizing to its wonderful strangeness. Paul is everything she wants him to be—passionate, talented, knowledgeable. She is convinced that it is here she will finally become pregnant.

But then Paul suddenly disappears, and Robin finds herself the prime suspect in the police inquiry. As her understanding of the truth starts to unravel, Robin lurches from the crumbling art deco of Casablanca to the daunting Sahara, caught in an increasingly terrifying spiral from which there is no easy escape.

With his acclaimed ability to write thought-provoking page-turners, Douglas Kennedy takes readers into a world where only Patricia Highsmith has ever dared. The Blue Hour is a roller-coaster journey into a heart of darkness that asks the question: What would you do if your life depended on it?

Douglas Kennedy is the author of eleven previous novels, including the international bestsellers The Moment and Five Days. His work has been translated into twenty-two languages, and in 2007 he received the French decoration of Chevalier de l’Ordre des Arts et des Lettres. He divides his time among London, New York, and Montreal, and has two children. Find out more at DouglasKennedyNovelist.com.

Praise for The Blue Hour:

“The best book about Morocco since The Sheltering Sky. Completely absorbing and atmospheric.”
— Philip Kerr

“Douglas does it again! This is the kind of novel you absolutely cannot put down, the kind that gets your pulse racing, to such an extent you have to switch off your phone, ignore your entourage, and devour to the very end. Brilliantly compelling, startling, and exotic, definitely one of Kennedy's best works.”
— Tatiana de Rosnay

“A gripping thriller, this book poses a universal question: how far are we prepared to go in pursuit of the truth, and do we really want the answers when we find them?”
— Louise Doughty

“Morocco—vividly described—is a shock of heat, smells, and searing colors…. Kennedy is one of the few writers to understand that people in love are basically insane; this love story darkens into a thriller as the methodical Robin pursues the truth. Romance noir, superbly written.”
— The Times (London)

“Kennedy has a knack for portraying characters readers love to hate.”
— Kirkus Reviews

“Douglas writes with verve, and plot twists, several sharply drawn characters and an exotic locale give the novel a cinematic quality. Hand this to readers looking for a page-turner with a strong female protagonist.”
— Booklist

“The Blue Hour sits firmly in the mode of existential crisis pioneered by Paul Bowles’The Sheltering Sky. With the added value of Kennedy’s far moreequitable eye: his scrutinizing but empathetic sensibility looks at Morocco inthe round, with an admirable respect for its nooks and crannies.”
— The Arts Fuse

“With Five Days, Douglas Kennedy has crafted a brilliant meditation on regret, fidelity, family, and second chances that will have you breathlessly turning pages to find out what happened in the past and what will happen next. At once heartbreaking and hopeful, it is a bracing new work of fiction by an internationally acclaimed writer at the height of his powers.”
— Will Schwalbe, author of The End of Your Life Book Club

“The prolific Kennedy explores his favored themes of mortality, love, and loss in this fluidly written tale. Deftly depicting how certain choices can unexpectedly narrow a life, instead of expanding it, he has much to say about the nature of happiness, the difficulty of change, and the great divide between obligation and desire.”
— Booklist

“A gripping emotional rollercoaster, pressing so many buttons it’s likely to have readers examining their own what-might-have-beens.”
— London Daily Mail

“Five Days delves exquisitely and painfully into how it is that people allow themselves to live lives of such tightly 'limited horizons.'”
— Portland Press Herald (Maine)

“A novel that's both moving and realistic as it broaches that awful chasm between what we could be and what we presently are."
— Independent (London)

Praise for The Moment:

“A passionate love-story-cum-spy-thriller set amid the secrets and shadows of Cold War–era West Berlin.”
— People

Praise for Leaving the World:

“Leaving the World is a classy page-turner from a novelist who has become a cultural icon in Europe.... Kennedy's characters embark on long, complex, provocative journeys, and their ultimate strength is that -- like the writer -- they can throw off bright sparks in the dark.”
— Column McCann

“In his fast-paced, engrossing novels Douglas Kennedy always has his brilliant finger on the entertaining parts of human sorrow, fury, and narrow escapes. Wonderful.”
— Lorrie Moore

“Smart, stylish, and emotionally penetrating. Kennedy is a master storyteller, who never fails to keep you gripped until the last page.”
— Sarah Dunant