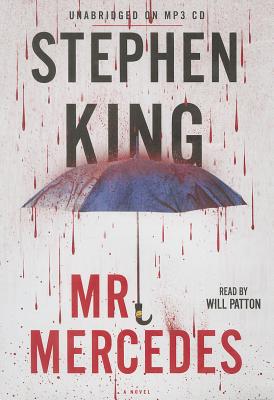 By Stephen King, Will Patton (Read by)
Email or call for price.
Not Available at This Time

WINNER OF THE EDGAR AWARD FOR BEST NOVEL
#1 New York Times bestseller! In a high-suspense race against time, three of the most unlikely heroes Stephen King has ever created try to stop a lone killer from blowing up thousands. “Mr. Mercedes is a rich, resonant, exceptionally readable accomplishment by a man who can write in whatever genre he chooses” (The Washington Post).

The stolen Mercedes emerges from the pre-dawn fog and plows through a crowd of men and women on line for a job fair in a distressed American city. Then the lone driver backs up, charges again, and speeds off, leaving eight dead and more wounded. The case goes unsolved and ex-cop Bill Hodges is out of hope when he gets a letter from a man who loved the feel of death under the Mercedes’s wheels…

Brady Hartsfield wants that rush again, but this time he’s going big, with an attack that would take down thousands—unless Hodges and two new unusual allies he picks up along the way can throw a wrench in Hartsfield’s diabolical plans. Stephen King takes off on a “nerve-shredding, pulse-pounding race against time” (Fort Worth Star-Telegram) with this acclaimed #1 bestselling thriller.

Will Patton's numerous film credits include Remember the Titans, The Punisher, The Mothman Prophesies, Armageddon, and The Spitfire Grill. He starred in the TNT miniseries Into the West and on the CBS series The Agency, and won Obie Awards in the theater for his performances in Fool for Love and What Did He See.