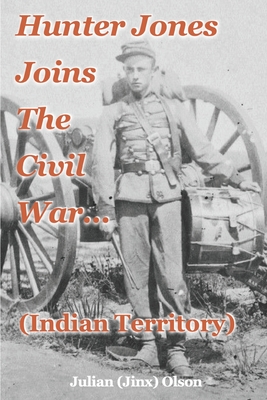 Hunter Jones Joins The Civil War (Indian Territory) *Hunter Jones is a 12-years-old orphan. Without a family or a place to go, when the Civil War breaks out, Hunter gets sucked up into it and carried off to high adventures and exciting escapades. We're with him when he learns about how the Indians got to Indian Territory and why some fought for the North and some fought for the South. We're with him when he learns about how Confederate soldiers from Texas plan to go up through the New Mexico Territory and capture the gold mines in Colorado to help pay for the Southern war effort. We're with him in Arizona where the Westerner most battle between the North and the South is fought and in New Mexico when Cochise and his father-in-law Mangas Coloradas and Geronimo turned on the white soldiers and start scalping them. *In the first Hunter Jones book he gets kicked in the head by a mules and goes into a coma. While in his hospital room his two close friends Patch and Peg Leg (old-timers) read to him headlines and stories from the battlefield newspapers. With his fertile imagination and dreams Hunter is carried away to events, battles and firsts that changed or altered the direction of the Civil War - West of the Mississippi. In this book he is still in a coma. We go with him to points west of the Arkansas border, out into the New Mexico Territory and the Arizona Territory and nearly to California and the Pacific Ocean. Yes, most of the major battles of the Civil War were fought in the east but the west saw its share of battles and skirmishes between soldiers from the North and South, including soldiers of color and soldiers drawn from the Native American population. *As you read, you'll feel the push and pull, the sweat and strain, the pleasures and the pain of Hunter Jones' life in the Confederate army. NOTE: Even though he and his story are fictional, the sad details, facts, figures and events of the Civil War are historically correct. Reading it, you'll laugh, cry and be glad as Hunter Jones dodges bullets and cleverly escapes sudden death but, more importantly, you'll carry away a sense of American History that is still alive today, 148 years later. *Visit: www.HunterJones.Info or search title & order at: www.Amazon.com.

Born in Swifton, Arkansas in 1940, raised in Michigan. Spent 4 years in the Navy, discharged in San Francisco. Married, had two daughters, suffered a sad divorce after 36 years. Returned to roots in Swifton. Wrote two books: Marriage, Divorce and the Soul Mates Left Behind; and Hunter Jones Joins the Civil War (Missouri). The second book in the trilogy is Hunter Jones in(Indian Territory). The third book will be Hunter Jones in (Arkansas).