Under the Dome: A Novel (Hardcover) 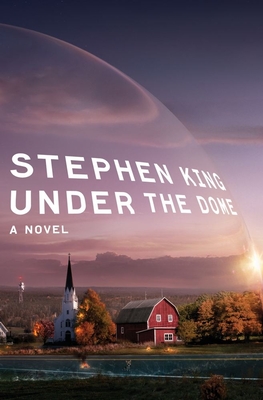 “Imagine a small town in Western Maine that is suddenly cut off from the rest of the world. Now, imagine what would happen next. King's latest is a story of good versus evil; the helpless and the helpful; people facing a terrible, senseless reality. This is Stephen King's best book since The Stand, and is destined to be a classic. Really.”
— Rita Moran, Apple Valley Books, Winthrop, ME

Don’t miss the “harrowing” (The Washington Post) #1 New York Times bestselling thriller from Stephen King that inspired the hit television series, following the apocalyptic scenario of a town cut off from the rest of the world.

On an entirely normal, beautiful fall day in Chester's Mill, Maine, the town is inexplicably and suddenly sealed off from the rest of the world by an invisible force field. Planes crash into it and fall from the sky in flaming wreckage, a gardener's hand is severed as "the dome" comes down on it, people running errands in the neighboring town are divided from their families, and cars explode on impact. No one can fathom what this barrier is, where it came from, and when -- or if -- it will go away.

Dale Barbara, Iraq vet and now a short-order cook, finds himself teamed with a few intrepid citizens -- town newspaper owner Julia Shumway, a physician's assistant at the hospital, a select-woman, and three brave kids. Against them stands Big Jim Rennie, a politician who will stop at nothing -- even murder -- to hold the reins of power, and his son, who is keeping a horrible secret in a dark pantry. But their main adversary is the Dome itself. Because time isn't just short. It's running out.

"Tight and energetic from start to finish... Hard as this thing is to hoist, it's even harder to put down." -- New York Times

"The work of a master storyteller having a whole lot of fun." -- Los Angeles Times

"King returns to his glory days of The Stand." -- New York Daily News

"Under the Dome moves so fast and grips the reader so tightly that it's practically incapacitating." -- Newsday

"Stephen King's Under the Dome was one of my favourite books of the year so far." -- Neil Gaiman

"Dome is classic King, sure to please any fan." -- Baltimore Sun