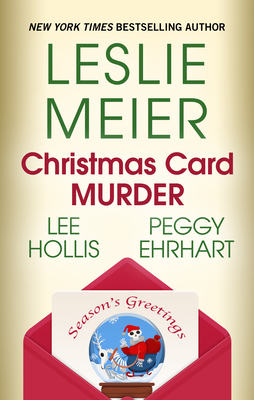 Leslie Meier is the acclaimed author of over twenty-five Lucy Stone Mysteries. She has also written for Ellery Queen's Mystery Magazine, and like her series protagonist, Lucy Stone, she worked as a New England newspaper reporter while raising her three children. She is currently at work on the next Lucy Stone mystery and can be found online at LeslieMeierBooks.com.Peggy Ehrhart is the author of the Knit & Nibble Mystery series and the Maxx Maxwell Mysteries. A former English professor, she holds a Ph.D. in medieval literature from the University of Illinois and taught writing and literature at Queens College, CUNY, and Fairleigh Dickinson University, where she was a tenured full professor. Her short stories have appeared in Futures Mystery Anthology Magazine, Crime and Suspense, Flashing in the Gutters, Spinetingler, Crime Scene: New Jersey 2, and Murder New York Style. A longtime member of Mystery Writers of America and Sisters in Crime, Peggy served on the board of MWA New York as head of the Mentor Committee. She was president of Sisters in Crime NY/TriState from 2013 to 2015. Peggy regularly attends mystery writing conferences and participates in conference panels and also gives talks on mystery fiction at libraries in New York, Connecticut, and New Jersey. Visit her online at PeggyEhrhart.com. Lee Hollis is the pen name for a brother and sister writing team. Rick Copp is a veteran film and television writer/producer and also is the author of two other mystery novel series. He lives in Palm Springs, California. Holly Simason is an award-winning food and cocktails columnist living in North Carolina.