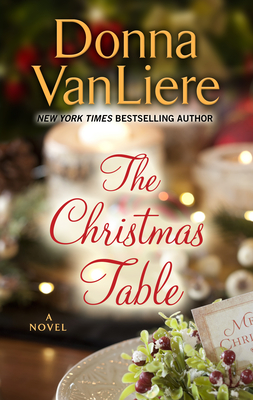 From Donna VanLiere, the New York Times bestselling author of The Christmas Hope series comes another heartwarming, inspirational story for the holidays, The Christmas Table.

In June 1972, John Creighton determines to build his wife Joan a kitchen table. His largest project to date had been picture frames but he promises to have the table ready for Thanksgiving dinner. Inspired to put something delicious on the table, Joan turns to her mother's recipes she had given to Joan when she and John married.

In June 2012, Lauren Mabrey discovers she's pregnant. Gloria, Miriam, and the rest of her friends at Glory's Place begin to pitch in, helping Lauren prepare their home for the baby. On a visit to the local furniture builder, Lauren finds a table that he bought at a garage sale but has recently refinished. Once home, a drawer is discovered under the table which contains a stack of recipe cards. Growing up in one foster home after another, Lauren never learned to cook and is fascinated as she reads through the cards. Personal notes have been written on each one from the mother to her daughter and time and again Lauren wonders where they lived, when they lived, and in a strange way, she feels connected to this mother and her daughter and wants to make the mother proud. The story continues to from 1972 to 2012 as Joan battles breast cancer and Lauren learns to cook, preparing for the baby's arrival. As Christmas nears, can Lauren unlock the mystery of the table, and find the peace she's always longed for?

DONNA VANLIERE is the New York Times and USA Today bestselling author of The Good Dream, Finding Grace, The Angels of Morgan Hill, and over a half dozen Christmas books, including the perennial favorites The Christmas Shoes and The Christmas Hope. She travels as a speaker and lives in Franklin, Tennessee, with her husband and three children.