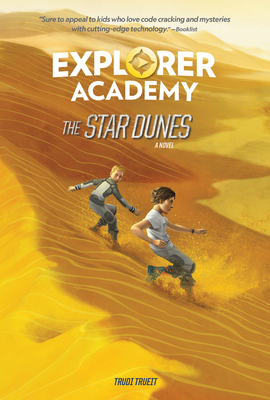 This is book number 4 in the Explorer Academy series.

A major discovery forces the Explorer Academy into the limelight in The Star Dunes, but Cruz has much more on his mind than 15 minutes of fame. A new face on board the ship causes Cruz's worlds to collide, just as a close call tears them apart. En route to Africa, Team Cousteau is now down a major player, and Cruz can't help but be preoccupied by the hole in his life. The discovery of his mom's next clue leads him to the most exotic location yet—a vast desert—with no other information to lead the way, while an unlikely ally helps Cruz pursue another piece of the puzzle. Just as things seem like they might turn out all right, Dr. Fanchon Quills has a technological breakthrough which gives Cruz a glimpse into the past and reveals more about his future than he may want to know.

TRUDI TRUEIT has written more than 100 books for young readers, both fiction and nonfiction. Her love of writing began in fourth grade, when she wrote, directed, and starred in her first play. She went on to be a TV news reporter and weather forecaster, but she knew her calling was in writing. Trueit is a gifted storyteller for middle-grade audiences, and her fiction novels include The Sister Solution, Stealing Popular, and the Secrets of a Lab Rat series. Her expertise in kids nonfiction encompasses books on history, weather, wildlife, and Earth science. She is the author of all the narratives for the Explorer Academy series, beginning with Explorer Academy: The Nebula Secret. Trueit was born and raised in the Pacific Northwest, and lives in Everett, Washington.

SCOTT PLUMBE is an award-winning illustrator, designer, and fine artist, whose work appears in books and magazines, games, interpretive centers, private collections, and more. His illustrations have been featured in magazines such as Communication Arts (US), Applied Arts (CA), Creative Review (UK), and 3x3 (US).