How Does the Show Go On Update: An Introduction to the Theater (A Disney Theatrical Souvenir Book) (Hardcover) 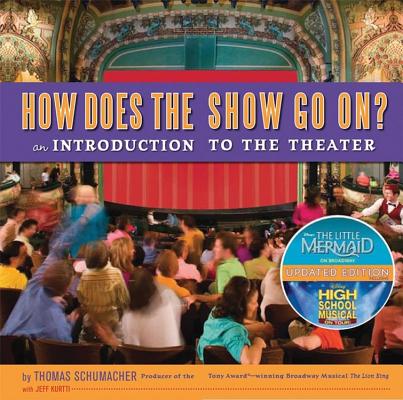 By Thomas Schumacher
$22.95
Email or call for price.

Thomas Schumacher has spent the past 18 years with The Walt Disney Company setting new standards of excellence in film, television, and theatre. Having spent much of his tenure as president of Feature Animation and Walt Disney Television Animation, he now serves as president of the Buena Vista Theatrical Group. Along with former Walt Disney Studios chairman Peter Schneider, he produced the world premiere of the Broadway musical The Lion King, which garnered six Tony Awards, including Best Musical. His other productions include Aida, Beauty and the Beast, Tarzan, and the upcoming Broadway adaptation of Mary Poppins.Jeff Kurtti is the author of more than a dozen books and scores of magazine articles, a writer-director of award-winning documentaries, and a respected public speaker, host, and panel moderator. He is currently the Creative Director of The Walt Disney Family Library (a project of The Walt Disney Family Foundation), and is considered one of the leading authorities on The Walt Disney Company and its history.