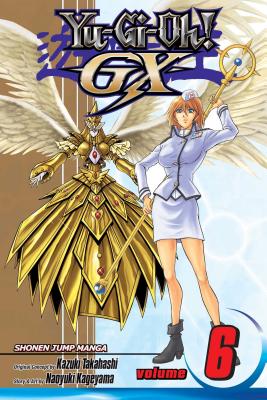 By Kazuki Takahashi (Created by), Naoyuki Kageyama
$9.99
Email or call for price.

This is book number 6 in the Yu-Gi-Oh! GX series.

The Next Generation of Duelist has arrived.

Years after Yugi's legendary battles, the game is so popular that special institutions dedicated to the art of the Duel have sprung up all over the world. Join Jaden Yuki and his pals at the Academy for the adventures of the next generation of Yu-Gi-Oh!

Chazz Princeton, the rising star of Duel Academy, faces the champion Ryo Kaiser in a fiery duel atop an active volcano! While his classmates' eyes are riveted on the big match, Jaden fights alone against Reggie Mackenzie, a duelist possessed by an evil entity. If Jaden wins, he might save the soul of his teacher, Miss Hibiki. If Jaden loses, Reggie will steal his precious "Winged Kuriboh" card...and Jaden's soul in the bargain!

Naoyuki Kageyama was born April 12, 1969, which makes him an Aries, and is originally from Tokyo, Japan. He is the recipient of an honorable mention for the 1990 Weekly Shonen Jump Hop Step Award for his work Mahou No Trump (Magic Trump) and started drawing Yu-Gi-Oh! GX for Monthly V Jump in February 2006. Kageyama is a baseball fan and his favorite team is the Seibu Lions.