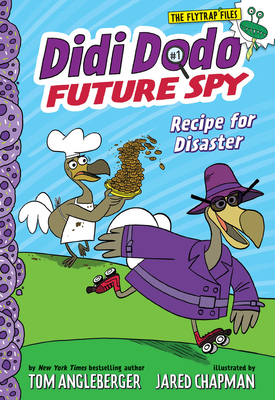 This is book number 1 in the The Flytrap Files series.

Meet Didi Dodo. She's a dodo and a spy. Or she will be, once she's hired!

Meet Koko Dodo. He's a dodo and a baker. He gives Didi Dodo her first case!

Someone has stolen Koko Dodo's Super Secret Fudge Sauce for the Royal Cookie Contest! But don't worry. Didi Dodo has a daring plan to catch the culprit.

Tom Angleberger is the New York Times bestselling author of the Origami Yoda series and the Flytrap Files series, as well as many other books for kids. He lives with his family in Virginia.

Jared Chapman was born in Louisiana, grew up in Texas, went to college in Georgia, lived in Austin, and now calls the piney woods of northeast Texas his home. He and his young brood prefer silly underwear to serious, and broccoli to celery.