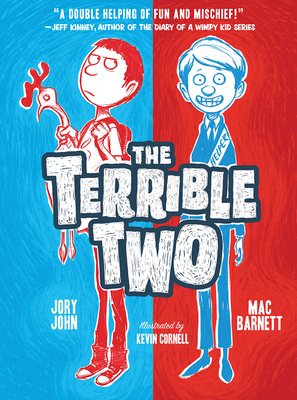 It's prankster against prankster in the first book of the hilarious New York Times bestselling series by Mac Barnett and Jory John!

Miles Murphy is known for one thing and one thing only: pranking.

He’s the best prankster his school has ever seen. So when he’s forced to move to boring Yawnee Valley (also known for one thing and one thing only: cows), he assumes he’ll be the best prankster at his new school too. There’s one problem. The school already has a prankster—and he’s good. Really good.

From bestselling authors Mac Barnett (Extra Yarn, Sam and Dave Dig a Hole) and Jory John (Penguin Problems, The Bad Seed) comes this deviously funny new series about fitting in, making your mark, and finding a friend where you least expect one. Oh, and cows.

Mac Barnett is the coauthor of the Terrible Two series and the author of many picture books, which have won multiple Caldecott Honors. Claire Keane studied graphic design in Paris before moving to Los Angeles, where she worked at Walt Disney Feature Animation for 10 years and contributed to Frozen, Tangled, Enchanted, and many other films. She now lives in Venice Beach, California, where she writes and illustrates children’s books.

Jory John is a New York Times bestselling author of books for both children and adults. He is a two-time E.B. White Read-Aloud Honor recipient. Jory's work includes the picture books Giraffe Problems and Penguin Problems, both illustrated by Lane Smith, the Goodnight Already! series, illustrated by Benji Davies, The Bad Seed and The Good Egg, both illustrated by Pete Oswald, and the award-winning Quit Calling Me a Monster!, illustrated by Bob Shea. He also co-authored numerous humor books, including the internationally bestselling All My Friends Are Dead. Jory spent six years as programs director at 826 Valencia, a nonprofit educational center in San Francisco. He resides in Oregon.

Kevin Cornell is the illustrator of many children’s books. He lives in Philadelphia.