The Grand Plan to Fix Everything (Hardcover) 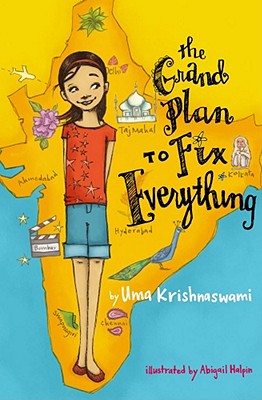 Eleven-year old Dini loves movies—watching them, reading about them, trying to write her own—especially Bollywood movies. But when her mother tells her some big news, it does not at all jive with the script of her life she has in mind. Her family is moving to India…and, not even to Bombay, which is the center of the Bollywood universe and home to Dini’s all-time most favorite star, Dolly. No, Dini is moving to a teeny, tiny village she can’t even find on a map. Swapnagiri. It means Dream Mountain and it only looks like a word that’s hard to pronounce. But to that open-minded person who sounds the name out, one letter at a time, it falls quite handily into place: S-w-a-p-n-a-g-i-r-i. An honest sort of name, with no surprise letters waiting to leap out and ambush the unwary. That doesn’t mean there aren’t surprises in Swapnagiri like mischievous monkeys and a girl who chirps like a bird—and the biggest surprise of all: Dolly.

So now, Dini is hard at work on a new script, the script in which she gets to meet the amazing Dolly. But, life is often more unpredictable than the movies and when Dini starts plotting her story things get a little out of control.

This is a joyful, lively Bollywood inspired story is full of colorful details, delicious confections and the wondrous, magical powers of coincidence. Uma Krisnaswami will have you smiling from ear to ear.

Uma Krishnaswami is the author of several books for children including The Grand Plan to Fix Everything and The Problem with Being Slightly Heroic. She was born in New Delhi, India, and now lives in British Columbia, Canada.

Abigail Halpin is an illustrator/graphic designer living in New England who likes bright colors, all things retro, and sharp pencils.

Hooray for Bollywood. Eleven-year-old Dini is not pleased at all at the prospect of leaving Takoma Park, Md., and her best friend Maddie to live in a small town in southern India for two years. But though she knows it’s ridiculous, bakvaas, as Indians say, she wonders if she might get to meet her idol, Dolly Singh, Bollywood film star. Dini and Maddie are devoted Dolly fans. And, in a series of events as wonderfully convoluted and satisfyingly resolved as any movie plot could be, she does. The fast-paced tale introduces and manages to connect an Indian-American family, a postal worker from Mumbai, a movie producer and his erratic star, a car mechanic, a tea plantation owner, a local baker and assorted monkeys—all coming together for a grand finale party and dance. Set in imagined Swapnagiri (which means Dream Mountain), this high-energy concoction is thoroughly believable and entertaining. The story is told in a third-person present-tense voice that rings true to its protagonist, who sees her life as a movie script. Though Dini and Maddie are halfway around the world from each other, they communicate through cell phones and computer chat, keeping up their friendship while making new ones. Full of references to Bollywood movie traditions and local customs, this is a delightful romp with a fresh setting and a distinctive and appealing main character. - KIRKUS, April 1, 2011, *STAR

Krishnaswami perfectly captures movie-star infatuation, best-friendship, geographical displacement, and youthful determination in this exuberant blend of American tween life and Indian village culture. When 11-year-old Dini's physician mother gets a grant to work at a clinic in the tiny village of Swapnagiri in India, Dini is plucked out of her contented life in suburban Maryland. Distraught about abandoning her BFF Maddie--who truly understands Dini's passion for Indian movie-star Dolly Singh--and their plans to attend Bollywood dance camp, she nevertheless remains optimistic as she tries to plot her new life, and those of the people she meets, as a screenplay. Krishnaswami (Naming Maya) interlaces Dini's story with lighthearted portrayals of the Indian film industry and postal system; she neatly and satisfactorily resolves every dilemma, suggesting elements of magic ("[W]hen you are moving... to a place whose name means ‘dream mountain,' your mind begins to open up in strange ways") while remaining firmly grounded in reality. An out-of-the-ordinary setting, a distinctive middle-grade character with an unusual passion, and the pace of a lively Bollywood "fillum" make this novel a delight.
--Publishers Weekly, April 4, 2011, *STAR