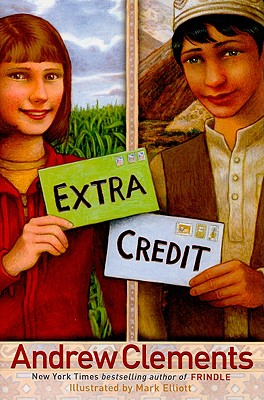 It isn’t that Abby Carson can’t do her schoolwork. She just doesn’t like doing it. And in February a warning letter arrives at her home. Abby will have to repeat sixth grade—unless she meets some specific conditions, including taking on an extra-credit project to find a pen pal in a distant country. Seems simple enough. But when Abby’s first letter arrives at a small school in Afghanistan, the village elders agree that any letters going back to America must be written well. In English. And the only qualified student is a boy, Sadeed Bayat. Except in this village, it is not proper for a boy to correspond with a girl. So Sadeed’s younger sister will write the letters. Except she knows hardly any English. So Sadeed must write the letters. For his sister to sign. But what about the villagers who believe that girls should not be anywhere near a school? And what about those who believe that any contact with Americans is . . . unhealthy? Not so simple. But as letters flow back and forth—between the prairies of Illinois and the mountains of central Asia, across cultural and religious divides, through the minefields of different lifestyles and traditions—a small group of children begin to speak and listen to one another. And in just a few short weeks, they make important discoveries about their communities, about their world, and most of all, about themselves.

Andrew Clements (1949–2019) was the author of the enormously popular Frindle. More than 10 million copies of his books have been sold, and he was nominated for a multitude of state awards, including a Christopher Award and an Edgar Award. His popular works include About Average, Troublemaker, Extra Credit, Lost and Found, No Talking, Room One, Lunch Money, and more. He was also the author of the Benjamin Pratt & the Keepers of the School series. Find out more at AndrewClements.com.

Mark Elliott has a BFA in illustration from the School of Visual Arts. He has illustrated a number of book covers, and his work has been exhibited at the Society of Illustrators and the Art Directors Guild. Mark lives on a sheep farm in the Hudson Valley region of New York.