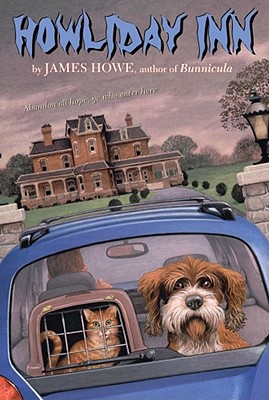 By James Howe, Lynn Munsinger (Illustrator)
$7.99
In Our Warehouse - Expected arrival in 2-5 days

Not a great place to visit, and you wouldn't want to live there

The Monroes have gone on vacation, leaving Harold and Chester at Chateau Bow-Wow -- not exactly a four-star hotel. On the animals' very first night there, the silence is pierced by a peculiar wake-up call -- an unearthly howl that makes Chester observe that the place should be called Howliday Inn.

But the mysterious cries in the night (Chester is convinced there are werewolves afoot) are just the beginning of the frightening goings-on. Soon animals start disappearing, and there are whispers of murder. Is checkout time at Chateau Bow-Wow going to come earlier than Harold and Chester anticipated?

Lynn Munsinger was born in Massachusetts. She has illustrated more than ninety books for children -- bringing Wodney Wat, Tacky the Penguin, a porcupine named Fluffy, the Teeny Tiny Ghost, and Ogden Nash's Custard the Dragon to charming life. Her watercolor illustrations have been praised for their "classic quality" (Publishers Weekly) and "mix of wry humor and affection" (Booklist).

"The story, with wonderfully witty dialogue and irresistible characters, is a treat for all ages."
-- Publishers Weekly