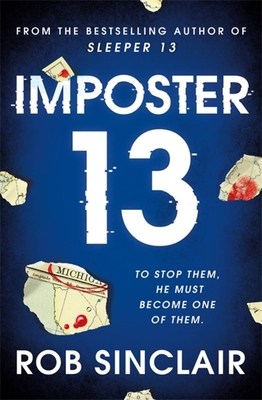 THE EXPLOSIVE FINALE TO THE SLEEPER 13 SERIES

Against all odds, Aydin Torkal - aka Sleeper 13 - broke free from the terrorist group that took him as a child and raised him into a life of violence and hate.

In the two years since, he's been tracking and killing those responsible. But he's not done yet.

Now living a secret life in London, MI6 needs his help infiltrating a sinister new terrorist cell. In order to halt their deadly ambitions, he must convince the world's most dangerous terrorists that he's one of them.

He must do it before the world suffers another deadly attack.

And he must do it alone.

'Perfect for spy thriller lovers and fans of I Am Pilgrim, Orphan X' - Goodreads review

'I could not put down this book' - Netgalley reviewer

Rob Sinclair is the author of the critically acclaimed and bestselling Enemy and Sleeper 13 series of espionage thrillers featuring embattled agent Carl Logan and terrorist-turned-vigilante Aydin Torkal, with over 1,000,000 copies sold to date. His thrillers have received widespread critical acclaim with many reviewers and readers having likened Rob's work to authors at the very top of the genre, including Lee Child and Vince Flynn.