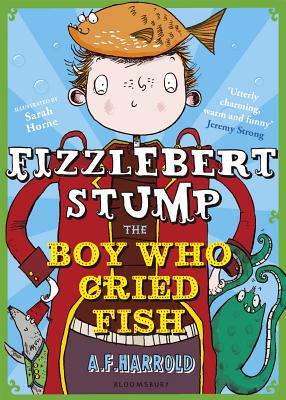 By A.F. Harrold, Sarah Horne (Illustrator)
Email or call for price.
Out of Print - Not Available at This Time

Fizzlebert Stump lives in a circus. His mum's a clown, his best friend is a bearded boy, and he sticks his head in a lion's mouth every night. Other than that, he's pretty normal.

When Fish the sea lion goes missing Fizzlebert tracks down the runaway beast to the Aquarium, with its piratical owner Admiral Spratt-Haddock, invisible octopus, and colour-coded fish. But the Aquarium has problems of its own. Fish (not Fish the sea lion, fish. Keep up.) are going missing, and the Admiral blames the circus. Can Fizzlebert solve the mystery, avoid an over-enthusiastic crocodile, and find his friend?

A.F. Harrold is an English poet (1975 - present). He writes and performs for adults and children, in cabaret and in schools, in bars and in basements, in fields and indoors. He was Glastonbury Festival Website's Poet-In-Residence in 2008, and Poet-In-Residence at Cheltenham Literature Festival in 2010. He won the Cheltenham All Stars Slam Championship in 2007 and has had his work on BBC Radio 4, Radio 3 and BBC7. He is active in schools work, running workshops and slams and doing performances at ungodly hours of the morning, and has published several collections of poetry. He is the owner of many books, a handful of hats, a few good ideas and one beard.

Sarah Horne is a versatile illustrator whose work has appeared in children's books, advertisements, and newspapers throughout the UK. She has also written and illustrated two books in her original series Molly & Mimi. Sarah lives in London.

“I enjoyed this book because it has so many unexpected twists that you never quite know what is going to happen next. Also, there are many ingenious characters who made me laugh. My favourite was the toad-like librarian.” —Lucy Minton, age 9, Lovereading4kids, on Fizzlebert Stump: the Boy Who Ran Away From the Circus (and joined the library)

“This story really will draw you in. It is one of my favourite books that I have ever read and I have read a lot of books!” —Adam Graham age 9, Lovereading4kids, on Fizzlebert Stump: the Boy Who Ran Away From the Circus (and joined the library)

“This fantastic book will blow your mind with their mysterious people and amazing tricks. When I put it down I almost cried because I just wanted to read more of this wonderful book.” —Lennon Kerrigan-Gee, age 10, Lovereading4kids, on Fizzlebert Stump and the Bearded Boy

“The author keeps the reader gripped by the way he ends each chapter, making you want to read on to find out what happens next. Even my mum enjoyed this book and I had to keep telling her what was happening to Fizzlebert and his friends.” —Freya Hudson, age 10, Lovereading4kids, on Fizzlebert Stump and the Bearded Boy