My Name Is Asher Lev (Paperback) 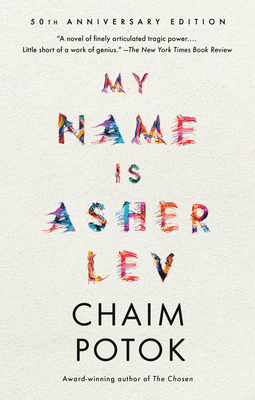 NATIONAL BESTSELLER • In this modern classic from the National Book Award–nominated author of The Chosen, a young religious artist is compulsively driven to render the world he sees and feels, even when it leads him to blasphemy.

Asher Lev is a Ladover Hasid who keeps kosher, prays three times a day and believes in the Ribbono Shel Olom, the Master of the Universe. He grows up in a cloistered Hasidic community in postwar Brooklyn, a world suffused by ritual and revolving around a charismatic Rebbe. He is torn between two identities, the one consecrated to God, the other devoted only to art and his imagination, and in time, his artistic gift threatens to estrange him from that world and the parents he adores.

As it follows his struggle, My Name Is Asher Lev becomes a luminous, visionary portrait of the artist, by turns heartbreaking and exultant.

Chaim Potok was born in New York City in 1929. He graduated from Yeshiva University and the Jewish Theological Seminary of America, was ordained as a rabbi, and earned his Ph.D. in philosophy from the University of Pennsylvania. He also served as editor of the Jewish Publication Society of America. Potok’s first novel, The Chosen, published in 1967, received the Edward Lewis Wallant Memorial Book Award and was nominated for the National Book Award. He is author of eight novels, including In the Beginning and My Name is Asher Lev, and Wanderings, a history of the Jews. He died in 2002.

“A novel of finely articulated tragic power. . . . Little short of a work of genius.” --The New York Times Book Review

“Memorable. . . . Profound in its vision of humanity, of religion, and of art.”--The Wall Street Journal

“Such a feeling of freshness, of something brand-new. . . . Attention-holding and ultimately moving.” --The New York Times