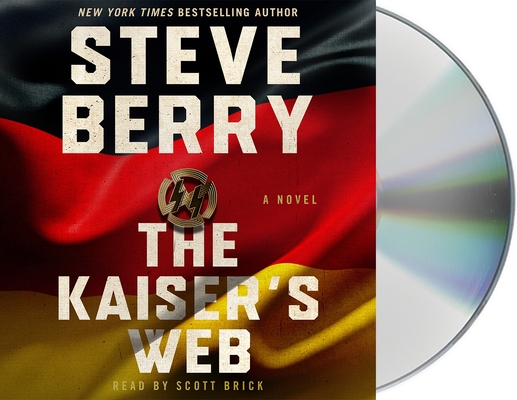 This is book number 16 in the Cotton Malone series.

"This gripping audiobook, narrated ably by Scott Brick, focuses on the chilling premise that both candidates for chancellor of Germany are Hitler's children...Brick's delivery is superb, bringing to the mic his ability to create unique voices--in this case, characters with distinctive accents from Germany, South America, and elsewhere. As the story unfolds, so, too, does Brick's intensity--right up to the audiobook's explosive conclusion." -- AudioFile Magazine, Earphones Award winner

This program includes an author's note read by Steve Berry.

In New York Times bestseller Steve Berry’s latest Cotton Malone adventure, a secret dossier from a World War II-era Soviet spy comes to light containing information that, if proven true, would not only rewrite history — it could impact Germany's upcoming national elections and forever alter the political landscape of Europe.

Two candidates are vying to become Chancellor of Germany. One is a patriot having served for the past sixteen years, the other a usurper, stoking the flames of nationalistic hate. Both harbor secrets, but only one knows the truth about the other. They are on a collision course, all turning on the events of one fateful day — April 30, 1945 — and what happened deep beneath Berlin in the Fürherbunker. Did Adolph Hitler and Eva Braun die there? Did Martin Bormann, Hitler’s close confidant, manage to escape? And, even more important, where did billions in Nazi wealth disappear to in the waning days of World War II? The answers to these questions will determine who becomes the next Chancellor of Germany.

From the mysterious Chilean lake district, to the dangerous mesas of South Africa, and finally into the secret vaults of Switzerland, former-Justice Department agent Cotton Malone discovers the truth about the fates of Hitler, Braun, and Bormann. Revelations that could not only transform Europe, but finally expose a mystery known as the Kaiser’s web.

"Brick is a masterful narrator, raising the tension in the action scenes while keeping the listener engaged in the slower historical segments."—AudioFile Magazine on The Malta Exchange

"Narrator Scott Brick's smooth voice flows with the twists and turns of Berry's political thriller...Secrets unravel, and tensions rise as Brick shifts vocal focus from the historical secret society to contemporary conspirators who include corrupt politicians and judges."—AudioFile Magazine on The Lost Order