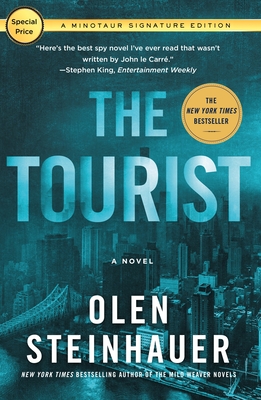 This is book number 1 in the Milo Weaver series.

“The classic spy novel is back! Only this time undercover agents are called 'Tourists,' and Milo Weaver has been called back into the game and asked to track a dangerous killer. This is espionage at its best with all the twists and turns you'd expect, a 'can't put it down' pace, and an ending that knocks your socks off. Steinhauer has crafted an enticing modern-day spy novel with such a surprising plot we find ourselves wondering at the end just who the proverbial 'good guys' really are!”
— Barbara Drake, White Birch Books, North Conway, NH

“Milo Weaver was once a 'tourist' (aka an undercover agent) for the CIA. After retiring and marrying -- and trying to settle into his new life -- the past resurfaces with the arrest of a wanted assassin, and Milo is drawn back into his old life as a tourist. Full of intrigue and betrayal, this is a first-rate, fast-paced thriller.”
— Sue Richardson, Maine Coast Book Shop, Inc., Damariscotta, ME

In The Tourist, Olen Steinhauer—twice nominated for the Edgar Award—tackles an intricate story of betrayal and manipulation, loyalty and risk, in an utterly compelling novel that is both thoroughly modern and yet also reminiscent of the espionage genre's most touted luminaries.

In Olen Steinhauer's explosive New York Times bestseller, Milo Weaver has tried to leave his old life of secrets and lies behind by giving up his job as a "tourist" for the CIA—an undercover agent with no home, no identity—and working a desk at the CIA's New York headquarters. But staying retired from the field becomes impossible when the arrest of a long-sought-after assassin sets off an investigation into one of Milo's oldest colleagues and friends. With new layers of intrigue being exposed in his old cases, he has no choice but to go back undercover and find out who's been pulling the strings once and for all.

*BONUS CONTENT: This edition of The Tourist includes a new introduction from the author and a discussion guide

Olen Steinhauer is the New York Times bestselling author of the Milo Weaver novels, including The Tourist and An American Spy. He is also a Dashiell Hammett Award winner, a two-time Edgar Award finalist, and has been nominated for the Anthony, Ian Fleming Steel Dagger, Ellis Peters Historical Dagger, Macavity, and Barry awards.

He is also the creator of the Epix TV series Berlin Station. He was raised in Virginia, and now divides his time between New York and Budapest.

Praise for The Tourist

“[Steinhauer] excels when the focus is on Weaver, an intriguing, damaged man yearning to break free of his dark profession.” —People

“The kind of principled hero we long to believe still exists in fiction, if not in life.” —The New York Times Book Review (Editor’s Choice)

“As rich and intriguing as the best of le Carré, Deighton or Graham Greene.” —The Los Angeles Times