The Dawn Country: Book Two of the People of the Longhouse Series (North America's Forgotten Past #18) (Paperback) 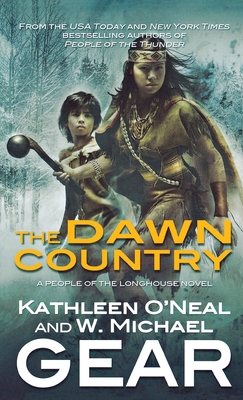 The epic tale that began in People of the Longhouse continues in this second book of the thrilling new Iroquois quartet by New York Times and USA Today bestselling authors and archaeologists Kathleen O'Neal Gear and W. Michael Gear.

War Chief Koracoo and Deputy Gonda of the Standing Stone People have successfully rescued their children, Odion and Tutelo, from Gannajero the Trader. Known as the Crow, Gannajero is a figure out of nightmare—a witch who steals children. Odion's friend Wrass is still held captive, along with several other children, in Gannajero's camp, and Koracoo and Gonda are determined to save them all.

This time, Koracoo and Gonda have allies: a battle-weary Mohawk war chief and a Healer from the People of the Dawnland, who have also lost children to Gannajero. These bitter enemies must learn to trust each other and find common ground. Will they be able to put their differences aside and rescue the children before they are sold and carried off to distant villages—and lost to their families and homes forever?

With their trademark mastery of American prehistory, Kathleen and Michael Gear tell a very human story of love and courage set against the backdrop of violent and endemic warfare of the Iroquois nations prior to the founding of the League of the Iroquois.

Kathleen O'Neal Gear is a former state historian and archaeologist for Wyoming, Kansas, and Nebraska for the U.S. Department of the Interior. She has twice received the federal government's Special Achievement Award for "outstanding management" of our nation's cultural heritage. With her husband, W. Michael Gear, she is the co-author of many books, including the North America’s Forgotten Past series (People of the Songtrail, People of the Morning Star, Sun Born, Moon Hunt, among others); and the Anasazi Mysteries series. She and her husband live in Thermopolis, WY.

“The second installment of the Gears' People of the Longhouse series is sure to keep readers turning the pages….As usual, the Gears, husband-and-wife archaeologists, have enriched and enhanced the gripping plot with plenty of anthropological, archaeological, and historical detail.” —Booklist on The Dawn Country

“The Gears, husband-and-wife archaeologists turned bestselling authors, continue their superbly researched and rendered North America's Forgotten Past series. This novel is as good a place as any of its predecessors to jump in and begin enjoying the authors' talents.” —Booklist on People of the Thunder