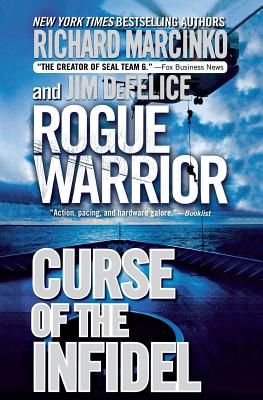 By Richard Marcinko, Jim DeFelice
$25.99
In Our Warehouse - Expected arrival in 2-5 days

This is book number 17 in the Rogue Warrior series.

Hot on the trail of a bank official who is laundering money for an al Qaeda-sponsored terrorist cell, Rogue Warrior Richard Marcinko finds himself in the thick of a covert operation run by the CIA—a.k.a. the Christians in Action. Angry that their operation has been ruined, the CIA demands that Marcinko and his Red Cell International group work for them. He agrees, then gets into a situation so dire only SEAL Team Six can extricate him.

While grateful for help from the unit he helped establish, Marcinko realizes there's a lot more going on than the CIA will admit—and when the investigation leads to a luxury liner loaded with explosives and contraband heading toward the United States, he recruits members from the original SEAL Team Six to help. But will the old-timers and young bucks be enough to prevent disaster in a US port?

RICHARD MARCINKO is a living, breathing hero honored with the silver star and four bronze stars for valor, along with two Navy Commendation medals and other honors. After serving in Vietnam, he went on to start and command SEAL Team 6, the Navy's anti-terrorist group, and Red Cell, a high-level anti-terrorist unit. Marcinko keeps his hand in the field as the president of a private international security company and now lives in Warrington, Virginia.

“Richard Marcinko is a master at showing us his world. It's not a very safe place, but visiting is well worth the risk. Marcinko's stories are as vivid as they are real. He's been there, and he has the talent to take us with him.” —Larry Bond, New York Times bestselling author of Dangerous Ground

“Marcinko's Rogue Warrior yarns . . . are the purest kind of thriller around, with action, pacing, and hardware galore.” —Booklist