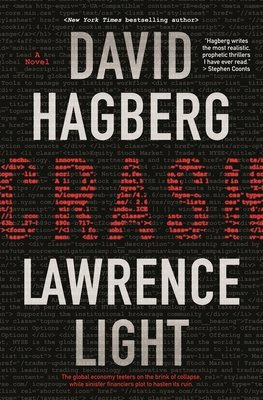 By David Hagberg, Lawrence Light
Email or call for price.
Not Available at This Time

The second Great Depression is coming. The world’s economies are groaning under too much debt. If one thing goes wrong, the entire rickety system collapses.

With debt-burdened governments and businesses worldwide about to go bust, a cabal of Wall Street big shots plot to destroy the globe’s stock exchanges. To provide that one thing that goes wrong. In 24 hours, a powerful computer worm will smash the exchanges and spark an international panic, pushing a debt-laden world into the abyss. The Wall Street gang’s investment bank will be the last one standing, able to make a killing amid the ruins.

But one person, who works for their bank as a computer expert, spots the worm embedded deep in its network. Cassy Levin invents a program to destroy the cyber-intruder. Angered by Cassy’s discovery, her bosses order her kidnapping.

Her boyfriend, a former Navy SEAL, is alarmed at Cassy’s disappearance and unravels the plot. Ben Whalen only has until the next morning to save the woman he loves and prevent the economic apocalypse.

This story is based on the genuine threat posed by towering debt, which will make the 2008 financial crisis look puny.

David Hagberg (1947-2019) was a New York Times bestselling author who published numerous novels of suspense, including his bestselling thrillers featuring former CIA director Kirk McGarvey, which include Abyss, The Cabal, The Expediter, and Allah’s Scorpion. He earned a nomination for the American Book Award, three nominations for the Mystery Writers of America Edgar Allan Poe Award and three Mystery Scene Best American Mystery awards. He spent more than thirty years researching and studying US-Soviet relations during the Cold War. Hagberg joined the Air Force out of high school, and during the height of the Cold War, he served as an Air Force cryptographer.

Lawrence Light is an award-winning financial journalist, who now works as the markets editor at Chief Investment Officer magazine. He also has been an editor and writer for CBS Moneywatch, investing editor of the Wall Street Journal, finance editor of Forbes and Money, and the corporate finance reporter for Business Week, where he was part of the team that won the National Magazine Award. Before getting into finance, he was a police reporter at the Long Island daily Newsday, where he was nominated for a Pulitzer Prize.

Larry is the former executive vice president of Mystery Writers of America, where he founded MWA University, a daylong program teaching craft around the nation. Larry is now MWA’s treasurer and a national board member. He has been an Edgar judge several times, and most recently served as chief judge for PBOs.

He is a lieutenant colonel in the Army Reserve and has been deployed around the world. He lives in New York City.

With David Hagberg, Larry is the coauthor of Crash.

“In these times where reality too often surpasses fiction, David Hagberg and Lawrence Light have managed to weave a course of events in their financial thriller Crash that manages both to surprise and leave us wondering– will this be the next shoe to drop?” —H.T. Narea, author of financial thriller, The Fund