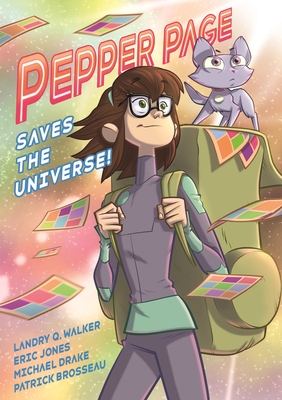 The year is 2421. Awkward and shy, Pepper buries herself in the universe of the classic fictional superhero Supernova to avoid dealing with the perils of the 9th grade. But then fate intervenes when Pepper encounters a strange cat named Mister McKittens and stumbles into a volatile science experiment run by a sinister substitute teacher named Doctor Killian.

Pepper is flung into another dimension, bringing her face to face with an order of cosmic beings who declare her to be the steward of their great power, champion of harmony in the universe, protector of worlds present and past.

Now, in the 21st Century, Pepper finds that she herself is the real Supernova. But as Pepper soon learns, escapist fantasy and reality are two very different things.

Landry Q. Walker is a New York Times bestselling author who has been making stories happen for over twenty-five years. He has worked on Batman, Supergirl, Star Wars, Frozen, and most everything else. When he is not randomly punching letters on a typewriter, he can be found in his backyard, absolutely failing to grow pumpkins. If you want to know more about Landry, he can occasionally be found babbling incoherently about stuff online.

Eric Jones has been drawing and painting since he was two years old, which is a very long time. Usually working with his friend and nemesis Landry Q. Walker, he has drawn everything from Star Wars to Batman to Supergirl to Phineas and Ferb. Eric has worked with Rock & Roll Hall of Fame legends Green Day, and acclaimed filmmaker Henry Selick, and he once saw Corey Feldman at a party. He collects old toys, listens to punk rock, and sometimes leaves the house, usually for groceries.

"A gallery of images in a highly readable afterword gives some insight into just how much work goes into a well-developed graphic novel... It’s a relief to see this is a planned series, so readers need not fret that this is the last of Pepper."—The Bulletin of the Center for Children's Books, starred review