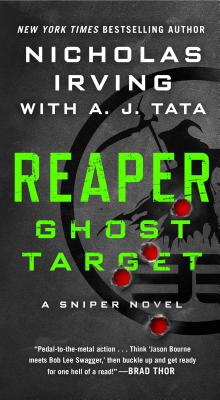 This is book number 1 in the The Reaper Series series.

Vick “The Reaper” Harwood is an esteemed sniper with a record kill count—33 kills in 90 days—when he is wounded at war. Now back in the U.S. with little memory of what happened, Harwood is eager to put the past behind him. He finds work training Special Forces snipers in Fort Bragg and enters a promising relationship with an Olympic medalist named Jackie. But his sixth sense tells him that something about his new life is not right.

“Will ensnare readers who follow Brad Taylor and Vince Flynn.”—Booklist


When a series of assassinations takes place in the area, Harwood has to wonder why the killings seem to be in line with his every move. Or why he feels like he’s being followed. Or how a sniper rifle matching the description of his own, which he lost, turns up out of nowhere. With his memory hazy and full of blackouts, Harwood is finally forced to ask himself: Is he being framed? Or is he the killer? Soon he’s on the run from the authorities. Jackie falls off the radar. And the assassinated men are outed as drug and sex traffickers. Nothing is adding up and time is running out for Harwood to unravel this mystery—or pay the price for crimes he may or may not have committed.

“The action is relentless and exciting.” —Library Journal

NICHOLAS IRVING is the New York Times bestselling author of The Reaper and Way of the Reaper. He spent six years in the U.S. Army’s Special Operations 3rd Ranger Battalion 75th Ranger Regiment, serving in a wide range of positions, from assaulter to Sniper Team leader. He was the first African American to deploy in the G.W.O.T as a sniper in his battalion.

Irving is now the owner of HardShoot, where he trains personnel in the art of long-range shooting, from Olympians to members of the Spec Ops community. He also appeared as a mentor on the Fox reality show American Grit, and has consulted on various films and television shows. He lives in San Antonio, Texas.

A. J. TATA, Brigadier General, U.S. Army (Retired), commanded combat units in the 82nd and 101st Airborne Divisions and the 10th Mountain Division. His last combat tour was in Afghanistan in 2007 where he earned the Combat Action Badge and Bronze Star Medal. He is the author of numerous national bestselling novels, including books from The Captain Jake Mahegan and Threat Series. He is the National Security Expert for One America News Network and a frequent foreign policy guest commentator on Fox News and CNN.

"Expert sniper Irving and coauthor Tata understand their weapons, tactics, and tradecraft inside and out. The action is relentless and exciting....Harwood's humanity and sense of justice show via his actions on and off the battlefield." —Library Journal

"You couldn't ask for a better writing team—from the strategic to the tactical—the experiences of both authors bleed through on every page, the authenticity ripped straight from a battlefield after action report. Reaper: Ghost Target starts with a crack, and hits on all cylinders." —Brad Taylor, New York Times bestselling author of Operator Down

"From Nicholas Irving and A.J. Tata—two guys who have walked the walk and definitely know how to talk the talk. Reaper: Ghost Target is impossible to put down." —Marc Cameron, New York Times bestselling author of the Jericho Quinn series and author of Tom Clancy's Jack Ryan novels

"Ghost Target by Nicholas Irving and A.J. Tata is a kinetic and elaborate page-turner; rich with detail and blazing with action, it’s one hell of a wild ride. Vick Harwood is a bigger-than-life hero thriller fans will love." —Mark Greaney, #1 New York Times bestselling author of Gunmetal Gray