Science Comics: The Digestive System: A Tour Through Your Guts (Paperback) 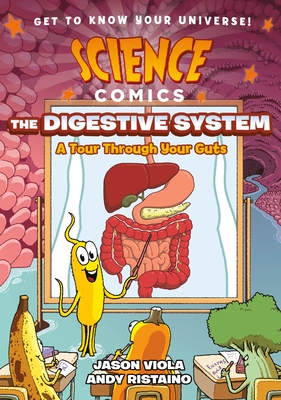 In Science Comics: The Digestive System, visit the inside of your mouth, stomach, liver, intestines, and other organs that make up the gastrointestinal tract!

Your guide to the gut is a friendly bacterium who will take you on a journey beyond imagination. Uncover how food is transformed into nutrients! Explore strange and dangerous glands! Behold the wonders of saliva, mucus, and vomit! Writer Jason Viola and illustrator Andy Ristaino provide a trip to the toilet you will never forget!

Every volume of Science Comics offers a complete introduction to a particular topic—dinosaurs, the solar system, volcanoes, bats, robots, and more! Whether you're a fourth grader doing a natural science unit at school or a thirty-year-old with a secret passion for airplanes, these graphic novels are for you!

Jason Viola grew up in small farm town in Massachusetts where he spent idle hours drawing comic strips about birds and cats. While his father's affinity for woodworking and storytelling encouraged his creativity, his mother managed a menagerie of pets which spurred an interest in animals that continues today. Continuing to find inspiration from biology and through the lens of pop culture, he has written about manatees, amoebas, and flowers with a modern, satiric twist. He's also written essays and reviews on independent comics, putting special emphasis on work that is often overlooked. Jason went to college in Buffalo, NY, where he met his wife Rebecca. They both help organize a Boston-area comics convention called MICE, and enjoy hiking together through the Middlesex Fells.

Jason is the co-author of Science Comics: Polar Bears.

Andy Ristaino is an artist and writer living in Los Angeles. He has worked as a designer and story boarder on Adventure Time for Cartoon Network and in his spare time likes to draw all sorts of creatures and aliens. He's had several trade paperbacks published including Night of the Living Vidiots, Escape from Dullsville, and The Babysitter!

"Magic School Bus graduates ready for a busy, heavy informational load will find this just the ticket. ...A fun and challenging introduction."—Kirkus

"Serious middle school ­voyagers who go with the densely informational flow will wind up not intellectually constipated but, like E, ­ultimately, flushed with ­wonder." —School Library Journal, starred review


Praise for the Science Comics series:

"This series—written by a handful of authors—seems determined to offer a useful introduction to anything a curious grade-school student might wonder about. The insight behind these books is a powerful one. So much information about the world around us is actually better conveyed visually, through charts, illustrations, and sequential panels, than purely using words." —New York Times

"Like having a Time Life Science Library in comic books. Which is awesome!" —Popular Science