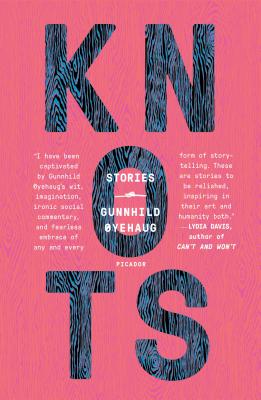 By Gunnhild Øyehaug, Kari Dickson (Translated by)
$16.00
Email or call for price.

First published in Norway in 2004, Knots is Gunnhild Øyehaug’s radical collection of short stories that range from the surreal to the oddly mundane, and prod the discomforts of mental, sexual, and familial bonds.

In both precise short-shorts and ruminative longer tales, Øyehaug meanders through the tangled, jinxed, and unavoidable conflicts of love and desire. From young Rimbaud’s thwarted passions to the scandalous disappearance of an entire family, these stories do the chilling work of tracing the outlines of what could have been in both the quietly morbid and the delightfully comical. A young man is born with an uncuttable umbilical cord and spends his life physically tethered to his mother; a tipsy uncle makes an uncomfortable toast with unforeseeable repercussions; and a dissatisfied deer yearns to be seen. As one character reflects, “You never know how things might turn out, you never know how anything will turn out, tomorrow the walls might fall down, the room disappear.”

Cleverly balancing the sensuous, the surreal, and the comical, Øyehaug achieves a playful familiarity with the absurd that never overreaches the needs of her stories. Full of characters who can’t help tying knots in themselves and each other, these tales make the world just a little more strange, and introduce a major international voice of searing vision, grace, and humor.

Gunnhild Øyehaug is an award-winning Norwegian poet, essayist, and fiction writer. FSG has published her story collection Knots as well as her novel Wait, Blink, which was adapted into the acclaimed film Women in Oversized Men’s Shirts. Øyehaug lives in Bergen, where she teaches creative writing.

Kari Dickson was born in Edinburgh, Scotland, and grew up bilingual. She has a BA in Scandinavian studies and an MA in translation. Her translation of Brown by Håkon Øvreås and Øyvind Torseter won the 2020 Mildred L. Batchelder Award. Before becoming a translator, she worked in theater in London and Oslo. She teaches in the Scandinavian studies department at the University of Edinburgh.

Kari Dickson was born in Edinburgh, Scotland, and grew up bilingual. She has a BA in Scandinavian studies and an MA in translation. Before becoming a translator, she worked in theater in London and Oslo. She currently teaches in the Scandinavian department at the University of Edinburgh.

“From my first reading of Knots in the original Nynorsk, I have been captivated by Gunnhild Øyehaug’s wit, imagination, ironic social commentary, and fearless embrace of any and every form of story-telling. These are stories to be relished, inspiring in their art and humanity both. How fortunate that we can now read them in Kari Dickson’s sparkling and magically faithful English.”
—Lydia Davis, author of Can’t and Won’t

“The rich variety of the stories in Knots contributes to the sense of unpredictability and wonder that pervades the book. But wonder in Knots doesn’t spring from variety alone. It arises from Gunnhild Øyehaug’s very conception of story, and only a rare writer is capable of such sustained surprise.”
—Stuart Dybek, author of Ecstatic Cahoots

"Her work is playful, often surreal, intellectually rigorous, and brief. She sometimes resembles Lydia Davis . . . Like Davis, she moves easily from the theoretical to the humanely engaged . . . And, like Davis, she can produce stabs of emotion, unexpected ghost notes of feeling, from pieces so short and offbeat that they seem at first like aborted arias . . ." —James Wood, The New Yorker

"Øyehaug’s newly translated collection charts entanglements of all kinds, from difficult families and first loves to more metaphysical experiments that combine a crisp minimalism with endearingly offbeat conceits . . . [Øyehaug's] stories are as original as they are joyously delicate and tranquil." —Publishers Weekly

“Formally playful, poignant, understated, and often acutely funny, Øyehaug’s English-language debut teems with humanity . . . A near-perfect collection about the knots we tie ourselves into and the countless ways we intertwine in the pursuit of sex, love, compassion, and family.”
—Kirkus Reviews (starred review)

"Replete with IKEA crises, uncuttable umbilical cords, and lewd eulogies, these stories will have you laughing at the strange way the 'world has organized today for you.'" —O, The Oprah Magazine