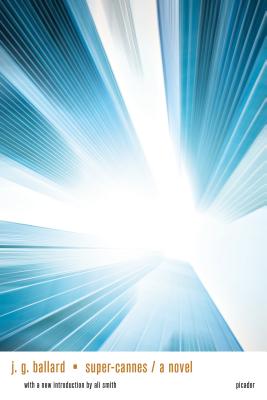 WITH AN INTRODUCTION BY ALI SMITH

Long-regarded as one of the true visionary writers of the twentieth century, J.G. Ballard was one of the first British writers of the post-war period to begin to see, and to map out in his fiction, the future course of our civilization. For forty years his unflinching eye has turned to the point where the advancing edge of our technological progress has worn away our inner humanity.

Eden-Olympia is more than just a multinational business park, it is a virtual city-state in itself, with the latest in services and facilities for the most elite high-tech industries. Isolated and secure, overlooking the luxurious French Riviera, the residents lack nothing. Yet one day Dr. Greenwood from Eden-Olympia's clinic goes on a suicidal shooting spree. Dr. Jane Sinclair is hired as his replacement, and she and her husband, Paul, are given Dr. Greenwood's house as a residence.

Unable to work while recovering from an accident, Paul spends his days taking a close look at the house where Dr. Greenwood shot himself and three hostages. He discovers clues in the house lead him to question Eden-Olympia's official account of the killings. Drawn into investigating the activities of the park's leading citizens, while Jane is lured deeper into Eden-Olympia's inner workings, Paul uncovers the dangerous psychological vents that maintain Eden-Olympia's smoothly running surface. An experiment is underway at Eden-Olympia, an experiment in power and brutality. Soon Paul finds himself in race to save himself and his wife before they are crushed by forces that may be beyond anyone's control.

J. G. Ballard is the author of numerous books, including Empire of the Sun, the underground classic Crash, The Kindness of Women, and Super-Cannes. He is revered as one of the most important writers of fiction to address the consequences of twentieth-century technology. He lives in England.

"Ballard’s fictional world [is] like no one else’s."—The Atlantic Monthly

"Ballard is our poet laureate of Modernism’s dead zones....[Super-Cannes] achieves a brilliant, thorny ambiguity—the kind that lodges splinterlike in your imagination, and refuses to come loose."—LA Weekly

"Rarely has his vision been so total, his creation so complete. Super-Cannes is as good as anything that Ballard has done before, and considering the work which that bland statement encompasses, it’s the highest possible praise."—Minneapolis Star Tribune

"One of his finest."—San Francisco Chronicle